Give it All to Change A Life: Fourth annual St. Baldrick’s event raises money to help fight cancer 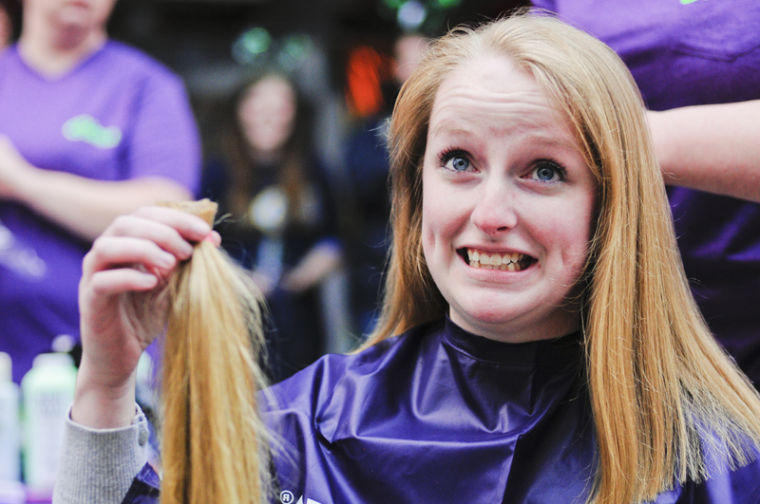 Omega Phi Alpha Bellevue sophomore Paige Smith shows her support of those suffering from childhood cancer by donating more than 12 inches of hair during the St. Baldrick's event. The donated hair goes to Pantene's Beautiful Lengths program, which makes wigs for women with cancer.

Many members of the WKU community gave up their hair for charity after Saturday’s baseball game for Omega Phi Alpha’s fourth annual St. Baldrick’s celebration.

After the game ended, a crowd gathered behind the stands where a table loaded with hair care products had been set up. Five Supercuts employees, including district manager Stacie Ennis, stood behind folding chairs placed around the table, waiting to begin.

Radcliff junior Sabrina Heinrich, who emceed the event, welcomed the Supercuts employees and gave the microphone to Ennis so she could speak.

“We do this every year, because I am a cancer survivor,” Ennis said.

Ennis said she was diagnosed with ovarian cancer when she was 15 years old, but after many rounds of treatment, her cancer went into remission.

“As of right now, I’m cancer-free and I’ve been cancer-free for the last six years,” she said.

“This is something that is very close to our hearts.”

Bellevue sophomore Paige Smith and Nelson County sophomore Devin Sympson, both members of Omega Phi Alpha, were the first to give up some of their hair.

After Smith and Sympson’s hair had been cut, Riley announced that five members of the baseball team would be the first people at the event to get their heads shaved.

“They’ve been helping us out for four years, and they’re here once again to shave their heads,” Heinrich said.

After five members of the baseball team had their heads shaved, Heinrich thanked them for all the team’s support and presented WKU Athletics with a plaque that head baseball coach Matt Myers accepted.

Bowling Green senior Don Vest, who had promised to raise $50 for St. Baldrick’s Foundation but had been unable to, had his head shaved and allowed people to write on his head with permanent marker if they made a donation.

After his head had been adorned with numerous messages from different people, Vest said he didn’t know how much money he made, but said he thought it was well over $50.

Vest said he thought letting people write on his shaved head was a creative and effective way to raise money, comparing it to a P.T. Barnum stunt.

He said he decided to have his head shaved after seeing a sign advertising the event a few days earlier.

The St. Baldrick’s day celebration came to an end with three women getting their heads shaved.

The event had 22 total participants who gave at least some of their hair.

“I always tried to take a really big role in it, because it’s so important,” she said.

“One of my best friends in high school passed away from stage four Melanoma.”