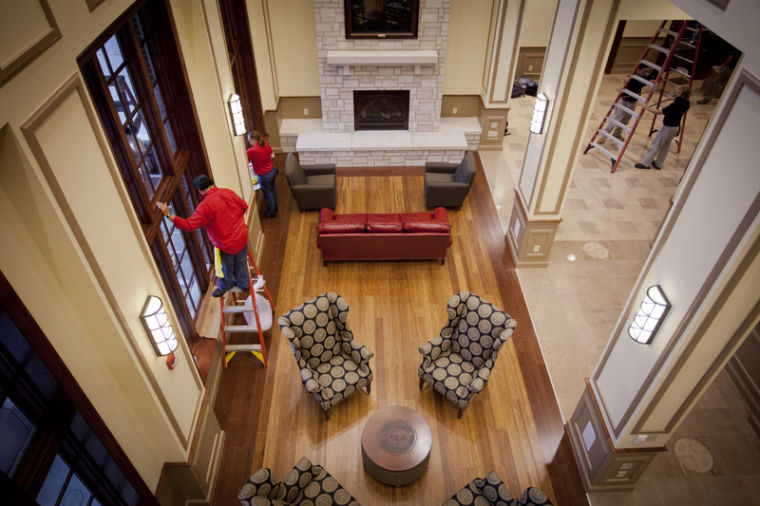 Workers prepare the atrium of the Augenstein Alumni Center for the Center's grand opening on Friday. The $8 million dollar Center has been under construction since mid-2011.

After years of planning and 18 months of construction, WKU will open the doors to a place both current and former students can call home.

This Friday, the Augenstein Alumni Center will have its grand opening ceremony, complete with a ribbon cutting in the afternoon and a party that night.

Kathryn Costello, the vice president for development and alumni relations, said the ceremony is meant to be a celebration of the new building. Around 300 people are expected to attend.

“They can gather with old friends and new friends,” Costello said.

Donald Smith, the executive director of Alumni Relations and president of the College Heights Foundation, said the idea for the building came from suggestions from WKU alumni.

“There were hundreds, if not thousands, of individuals who made this a reality,” Smith said

The purpose of the new Alumni Center is to have a building for alumni when they come back to campus, Costello said.

It will also house alumni administrative services and a museum, and university events will be held in the center’s ballroom.

Campus tours will also begin from the new building.

“It will be a lovely place for them to see what a great program exists for alumni after they graduate,” Costello said.

Some of the programs offered for alumni include the “alumni college,” which is a week’s worth of courses taught by WKU faculty.

The new center will also likely facilitate networking between WKU alumni for career opportunities in the future, Costello said.

Smith said there are currently around 100,000 WKU alumni around the world who all could be part of the network.

“There are very unique things throughout the building that will instill that sense of pride,” Smith said.

For alumni who graduated 50 years ago, the center will also host the Golden Anniversary club.

“We don’t want students after they walk across the stage to forget about their alma mater,” Smith said.

The ceremony will begin with a small private gathering of donors who have given around $10,000 or more for the center early Friday morning, Costello said.

Costello said the $8 million building was a “reflection of private gifts,” with $5.6 million raised from private individuals.

The WKU Foundation and DELO leased the rest of the funds, which will be

“The donors are really the ones presenting it to the university,” Costello said.

The Bowling Green Downtown Development Authority also collaborated, by suggesting the building be constructed closer to downtown to connect the university to the city, Costello said.

The Alumni Center is part of a larger plan for that area to connect WKU to Bowling Green. Some of the suggestions include a new store, restaurant, hotel and a new building for the Gordon Ford

“It is the university moving closer into town,” Costello said.

Now that the center is completed, Smith said it will help “instill the WKU spirit” in current and past WKU students, and give alumni a central location on campus.

“Now there is a place on campus for them to call home,” Smith said.

However, Smith emphasized that the new Alumni Center is not just for alumni to enjoy.

“While it has Alumni Center in the name, it is a place for everyone in the Hilltopper family,” Smith said.

President Gary Ransdell will be at the celebration at 2 p.m., as well as a donors luncheon before that.