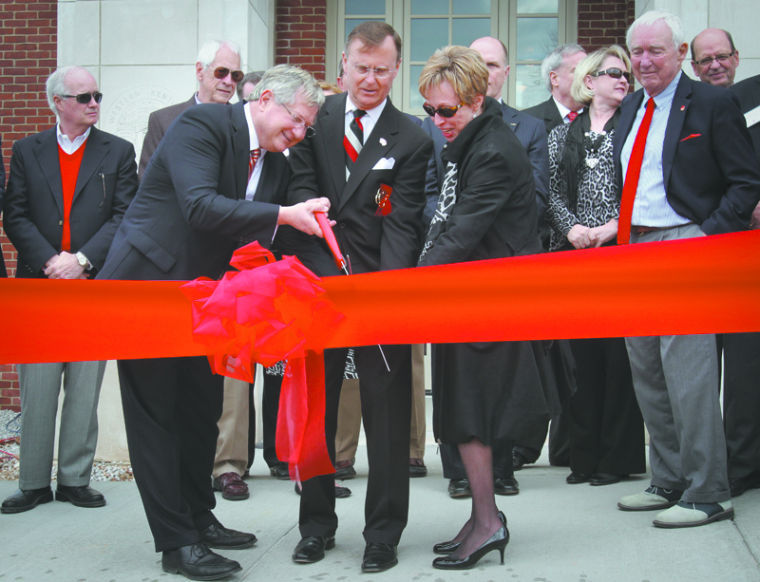 Alumni have a new place on campus to celebrate their Hilltopper pride, one alumni and administrators say will help both current and prospective students.

The Augenstein Alumni Center had its grand opening celebration on Friday, and Dale Augenstein, for whom the building is named, was in attendance.

“This building is going to be such a catalyst for the university for the next hundred years,” Augenstein said. “It’s really setting on the cornerstone of the future development of the campus as it grows north.”

It is set to offer students meeting space and a place to engage with alumni, according to Kathryn Costello, Vice President for Development and Alumni Relations and CEO of the WKU Foundation.

“The building is spectacular,” she said. “It represents the very best of the university and I think it really forecasts the future for young people.”

It will also be the place where all campus tours will begin, starting in the summer. From its front door, the alumni center gives a view of other prominent campus buildings, including Cherry and Van Meter Halls.

President Gary Ransdell said days like this are special for universities.

“It defines our personality,” he said. “It nurtures our traditions and allows our alumni to be a part of this university family, and they are, and they’ve come together to fund this project.”

For alumni, including Nashville resident Gef Cherwak, donating to help build the center was a way to give back the university.

“I grew up in Bowling Green,” he said. “Western’s always been a part of my life and now I’m, of course, an alumni. Western gave me so much in my life that I feel lucky that I had an opportunity to give back.”

Bowling Green alumna Heather Rogers felt the facility could help the nonprofit organization she works for host events. She was also glad to see something built that had previously simply been an idea.

“It’s amazing,” she said. “I was speechless, really to walk in and see this beautiful facility. I was on the alumni board several years ago when this was just a dream and to now actually see it come to fruition is just absolutely awesome.”

The dedication ceremony also brought alumni from places further away than Nashville and Bowling Green.

“It’s really a pleasure today to see hundreds, literally hundreds upon hundreds, of alumni come from all over the country,” Augenstein said.

Ransdell called the new facility a home for alumni.

Ransdell also commented on the alumni donations that made the center possible. The building was built entirely off of donations from WKU alums, only the second building on campus.

“The alumni did this in and of themselves, and it’s just great to see this university family come together like this,” he said.

The day was also special for Ransdell not only as a member of the university family as an alumnus, along with his wife, Julie, but as an administrator as well.

“It’s so rare to be in this job, be an alumnus and to be in this job at your university,” he said. “And that’s what we feel very fortunate, Julie and I, to be able to do….I’d be here celebrating and high-fiving even if I wasn’t president.”

Augenstein noted it was a bit tough to see his name on the building.

“It’s certainly very exciting to see the building and to be honest with you, it’s a little challenging to see your name on a building that’s going to be there forever,” he said.