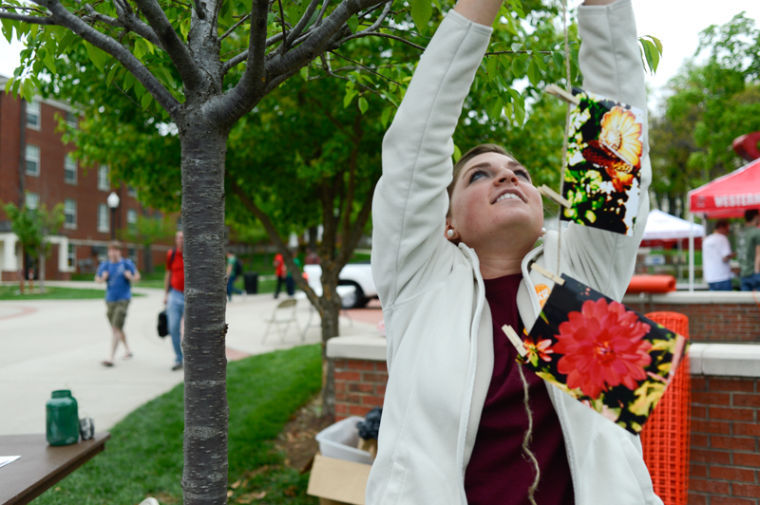 Louisville sophomore Kelly Del Grosso is a member of the GreenToppers club for student workers. The club set up a table for Earth Day in order to promote sustainable energy.

People celebrated Earth and conserving its resources at WKU for the annual Earth Day Festival at Centennial Mall on Friday.

“Mostly, more than anything, it’s a celebration, but it’s also just a chance for departments and organizations around campus to tell what they’re doing to support our sustainability mission,” she said.

There were around 50 organizations from the campus and community that had tables at WKU’s seventh annual Earth Day Festival, Ryan-Downing said. They included Fair Trade WKU, Dining Services, Feel Good and GreenToppers.

GreenToppers tackled the use of disposable plastic bottles at their booth. They encouraged students to sign a pledge not to use one-time-use plastic water bottles. In exchange for taking the pledge, students received a reusable water bottle.

Richmond sophomore and GreenToppers co-president Matt Frazier said the group had a demonstration set up.

“Approximately 700 water bottles are dumped into a landfill every second,” he said.

The group had a collection of water bottles that stood about five feet high to represent this.

“It’s just unreal how much waste there is,” he said.

The festival included people from the community. Students who were there, including Bowling Green freshman John Greer, felt sustainability was a worthy goal that the festival promoted.

“I think it’s evident as of late that the resources we’re expending have kind of had this really big impact on our environment, and it’s been a negative one,” Greer said. “And in order to combat that, we need to conserve the amount of resources we’re spending and try and make an effort to conserve so that we can protect the environment for future generations.”

Protecting the future was also why Bardstown senior Susan Livers felt the event was important.

“I feel that if we aren’t sustainable now, that we don’t have a future later on,” she said.

She also felt a fair like this one can help people learn how to do their part.

Another activity at the event was a T-shirt swap. Attendees also had a chance to look at a Chevrolet Volt, a plug-in gasoline-electric hybrid vehicle.

The festival drew people from beyond Bowling Green. Students from Barren County High School also came to the festival.

“It’s just a way for people to learn about what’s going on sustainability-wise on campus and in the community,” Ryan-Downing said.

The festival came on the same day WKU announced that it had won the Bluegrass Unplugged power saving competition with other Kentucky colleges and universities. Ryan-Downing said while the final nationwide numbers are still coming in, WKU won first place for saving power in Kentucky.