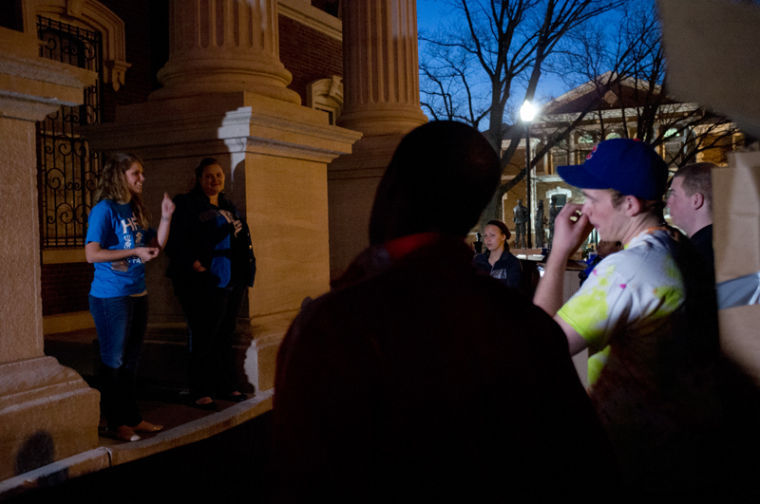 Shanty town participants listen to keynote speakers after finishing construction on their cardboard homes where they also slept Friday.

There were houses made of cardboard on the front steps of the old courthouse in Bowling Green.

Shantytown was put on by Habitat for Humanity. Those who came downtown and participated built houses out of nothing more than cardboard and duct tape. The purpose was to simulate for one night what some who are homeless experience every night.

For Owensboro sophomore Audrey Castlen, Shantytown was a chance to put her own life into perspective.

“It definitely brings your heart into it,” she said. “It makes you think about what you have and what other people don’t.”

Even though the houses on the old courthouse steps were just made of cardboard and duct tape, the builders found ways of adding some touches of home. Some fashioned chimneys and drew bricks on them. One brought her pillow.

As for how to get by on what was looking to be a warmer but still chilly night — the modern conveniences and touches of a real home would have to go.

“It’s so much more real and affects so many more people than we realize,” Graehler said.

There are a larger number of people without quality housing locally than many people realize, she said.

Shantytown also sought to bring attention to those living in substandard housing.

It was one event in a week of activities organized by WKU’s Habitat for Humanity campus chapter. Organizers called it “Act! Speak! Build!” week.

Other events included tossing money into a toilet in front of Helm Library and a nail-driving contest.

In between building the cardboard shanties, the organizers talked to the builders about Habitat for Humanity.

Even though not everyone is affected directly by homelessness and substandard housing, the number of people indirectly affected is much greater.

“It’s affecting so many people that we love,” Graehler said. “Maybe we don’t know directly someone that doesn’t have a home, but I guess substandard housing is definitely a problem, even within this community.”