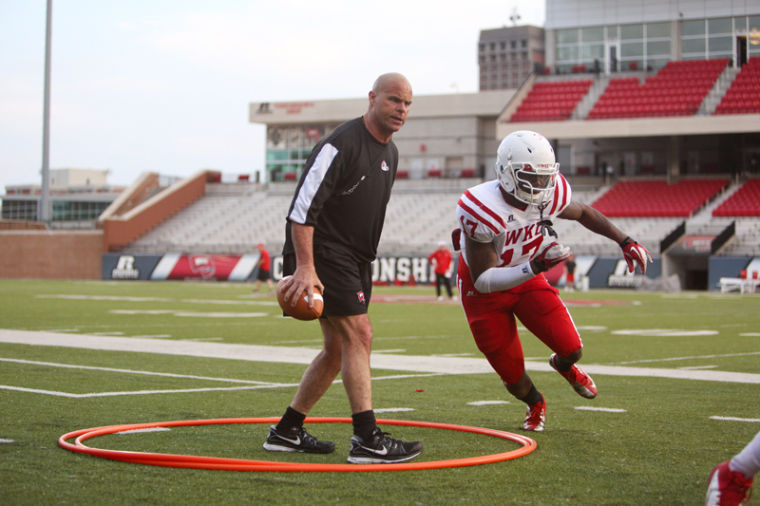 Hilltopper Defensive Coordinator Nick Holt (left) yells to linebacker Daqual Randall, No. 17, to catch a relay partner in a running exercise during practice on Wednesday at Smith Stadium.

Saturday’s spring game is the final opportunity for Topper fans to come out and get a glimpse of the team that will take the field next season.

WKU has taken steps to ensure the atmosphere at the game, which will kick off at Smith Stadium at 2 p.m. Saturday, is as close to a regular season environment as possible.

Parking near the stadium will be free and tailgating will be allowed at several areas around campus.

Director of Athletics Communications Michael Schroeder said WKU is hoping the chance for fans to come see the Toppers compete for the last time this spring will fill up the stands.

“We’re really excited to be able to provide basically a regular season atmosphere at the spring game on Saturday,” he said. “Fans that come into Houchens-Smith Stadium will notice basically everything is similar to what it is for a regular season game — concessions will be sold including beer, there will be promotions when you enter the gate and opportunities to win prizes.”

WKU has seen the number of fans at this spring’s public practices rise during the past five weeks and could host one of its biggest spring game crowds in a long time Saturday.

Poor weather and night games have hurt WKU’s spring game attendance in the past, though about 3,500 Topper fans showed up for last season’s game.

Good weather — as of Thursday, the forecast for Saturday afternoon looks to be sunny and in the mid-60s — and buzz around the program under first-year coach Bobby Petrino could bring out more fans this time around.

Offensive coordinator Jeff Brohm, also in his first year at WKU, is preparing for his first spring game with the program.

He said the team has worked hard over the course of the past month and he’s expecting a good showing from the fans Saturday afternoon.

“This fan base is a great fan base, I think they’re looking forward to having a good year,” Brohm said. “We’re going to do our part and work extremely hard to make sure that we’re ready to go take advantage of every opportunity, every practice, every chance we have to get better and hopefully put a good product on the field.”

Sophomore tight end Tyler Higbee said the Toppers are ready to compete with each other after spending much of the past month training.

“We’ve been practicing for five weeks,” Higbee said. “Everyone’s ready to get out and put on a little show for the fans.”