Survivors and supporters rally at Take Back the Night 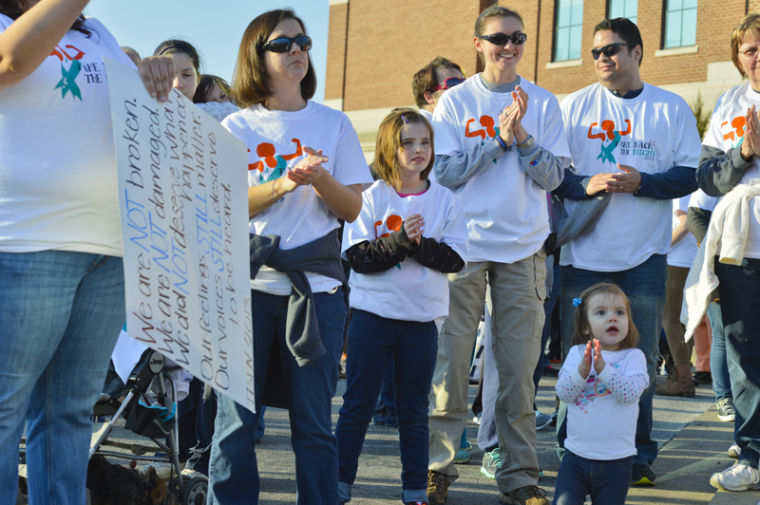 Members of the community gathered at the Justice Center to support Hope Harbor and promote awareness of sexual assault during the annual "Take Back the Night" March, 28, 2013.

“I am a survivor,” Alina Klein said during her keynote speech at Bowling Green’s Take Back the Night event organized by Hope Harbor on Thursday night.

Klein, who drove from her home in Indiana to speak at the event, is the author of “Rape Girl,” a book about a teenage girl who is raped and then reports her rape to police and presses charges against her assailant.

“The book is not an autobiography, but it is based on my experience and the feelings I had after I was raped,” Klein said.

Klein told listeners at Take Back the Night that she was raped in her home in the middle of the afternoon by a boy she knew from school when she was 16 years old.

“My rape went against all of the stereotypes,” Klein said.

Two days after her rape, Klein told her mother who then called the police. After she reported her assault, five other girls came forward and said that the same boy had raped them too. But, when it came time to press charges only one of the other five girls decided to confront their rapist in court.

“(The town) thought that my mom and I put the other girls up to it,” Klein said. “They thought that we were the ring leaders in a band of liars.”

Klein’s trial ultimately ended in a mistrial because the jury said the prosecution failed to establish her age at the time of the rape. The boy was convicted in the rape of the second girl but spent less than a week in jail.

“Three percent of rapists ever spend a day in jail, at least he was part of that three percent and I felt like I had a part in that,” Klein said.

“It was an amazing book, but it didn’t tell my story,” she said. “In that book (the girl’s) problems stem from not telling, and my book is about the problems that telling can cause.”

She said that most of her problems stemmed from speaking up. After she reported her rape to police and the investigation began, everyone in the small town where she lived knew what had happened and most chose to support her rapist.

“It was the right route for me to take,” Klein said. “I am glad that I told as hard as it was, I didn’t have it inside of me (anymore) — it wasn’t hurting me from the inside out.”

When she moved away from her small hometown, Klein didn’t tell anyone about her rape for years. It was not until she decided to write her book that she decided to become an activist for other women.

“It was quiet involvement at first, and it grew along with my book,” she said.

Klein’s main message is about speaking, whether that is speaking about your own experiences or joining in conversations online. She said that it is critical that people speak up online about rape culture and address it when they see it.

“The word ‘rape’ carries so much stigma,” Klein said. “It’s a word that describes some horrible thing, just like murder.”

She said that the stigma surrounding the word ‘rape’ adds to a culture of silence and the pain of victims.

“People blame the victim because it makes them feel safer,” she said.

Iman Graham, a freshman from Nashville, said that she thought that the excerpt Klein read was beautiful.

“I could visualize the words in my head,” she said. “I would hate to imagine what she has been through, but I am glad that she is strong enough to let her voice be heard in an effort to give voices to those who won’t speak up and out about rape.”

“I think it’s really important for people to have access to books like ‘Rape Girl’ because (rape) is such a silent epidemic,” said the freshman from Marion, Ill. “It’s a great tool for parents to use to talk to their children about sexual violence.”

Whittington said she really liked seeing parents there with their kids, because it opened the door to talking about the issues.

Klein said that if she could say one thing to survivors she would tell them that anything is possible.

“Your dreams are not out of reach,” she said. “There is happiness at the end of the tunnel if you just keep going.”