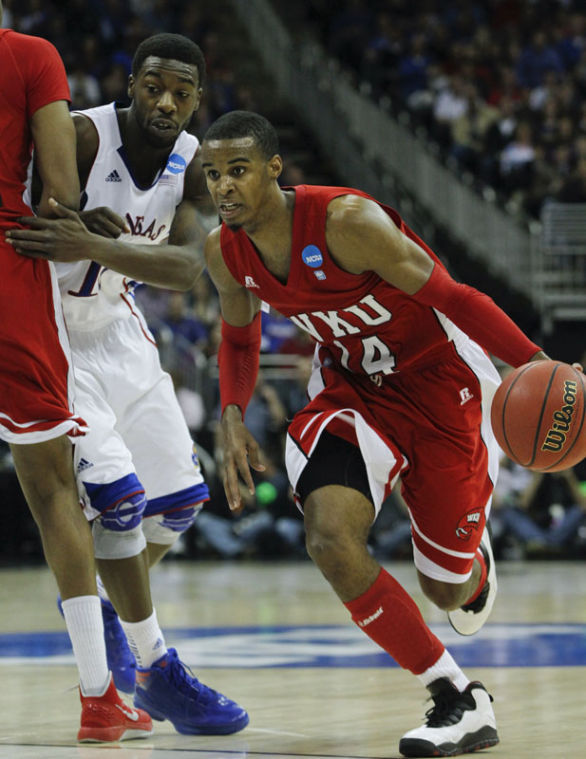 WKU senior guard Jamal Crook (#14) brings the ball down court during the second half March 22 at the Sprint Center in Kansas City, Mo. KU beat WKU 64-57.

KANSAS CITY, Mo. — If the first half of Friday’s NCAA Tournament game against Kansas was a dream come true for WKU, the second half was a nightmare.

WKU’s season ended at the Sprint Center in Kansas City, Mo., as the Toppers fell to the Jayhawks 64-57 after leading 31-30 at halftime.

Coach Ray Harper said he was proud of the way No. 16 seed WKU played against No. 1 seed Kansas.

“I think the entire country got a glimpse of what they’re made of — their character and their heart,” he said after the game.

The Toppers like the No. 1 seed in the first half, connecting on 13-of-27 shots and forcing nine Jayhawk turnovers.

Sophomore forward George Fant said the Toppers were looking to close the game when they came into the locker room with the lead.

“We talked about stepping on the throat and finish it off,” he said. “First four minutes in the second half we came out a little slow. That’s all it takes, you know.”

The second half, however, was a different story. Kansas shot 47 percent and held the Toppers to just 8-of-39 from the field, including 2-of-14 from beyond the 3-point arc.

The loss was the final game for senior guards Jamal Crook and Marcus Vasquez, both of whom are graduating.

But he wasn’t able to match the Jayhawks stars — senior center Jeff Withey finished with 17 points and six rebounds for Kansas while freshman guard Ben McLemore had 11 points and six boards.

Harper said the Jayhawks deserve credit for the second half comeback — they outscored WKU 34-26 in the final 20 minutes.

“Give (Kansas coach Bill) Self and Kansas credit, they did what they had to down the stretch to win the game,” he said.

WKU made it this far into the postseason by riding Crook, Fant and sophomore guard T.J. Price.

Fant fouled out with about five minutes to go, finishing with 10 points, while Price dropped 12 points on the Jayhawks.

Junior guard Brandon Harris, another big factor in WKU’s run through the Sun Belt Conference Tournament earlier this month, had three points and four boards on 1-of-7 shooting.

While the season may be over, Harper said he thought his team did a good job earning respect as a No. 16 seed.

“You know, our kids did everything they needed to do to put themselves in a position to try to win the basketball game,” he said. “As a coach, that’s all you can ask.”