S is for Sparks: Local blacksmith creates and teaches 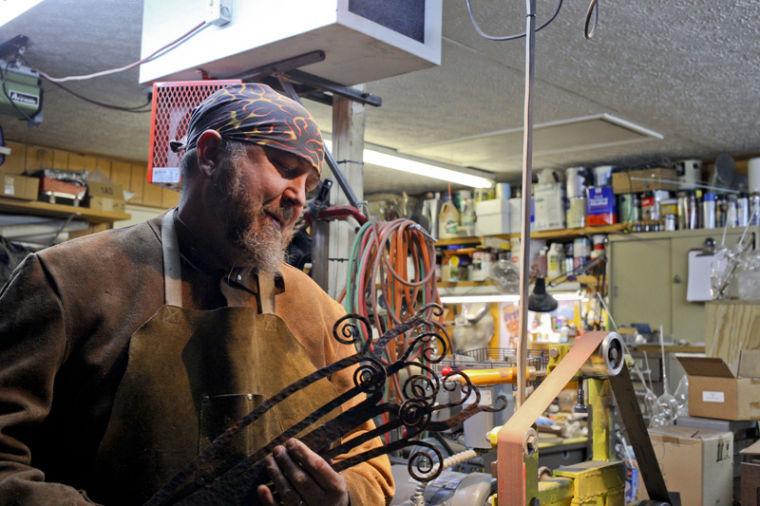 Charles Hurst, owner of Lick Skillet Lab, inspects a hinge which he's making for his new blacksmithing shed. Currently, he works out of his garage but is building a new space to allow him more room to work. Hurst has been blacksmithing for the past 10 years after he decided to make his own wood-working tools.

In the back corner of a cluttered shop on the outskirts of Bowling Green, Charles Hurst swings his hammer and sparks fly off the red-hot metal he is shaping into a knife blade.

He is well suited for the strenuous job, as his capable hands easily bend the metal to his will.

His small shop is full of tools and bits of metal, and in one corner sits two propane forges, which are able to heat up to 2,000 degrees, and his anvil, which is a hefty 250 pounds and over 100 years old.

Hurst said he comes from a legacy of blacksmiths and woodworkers; both his great-grandfather and grandfather worked with metal.

“I had understood that it was part of the heritage, part of the family,” Hurst said. “There was always someone around that was a blacksmith.”

He said he started blacksmithing by making his own tools.

“There’s just something…romantic about making your own tools,” he says, as he provided a small double-handed saw for inspection.

Charles uses local wood, such as walnut, cocobolo wood or rosewood to finish off his products, and he gets much of it from the local Mennonite community in Scottsville, where they have a sawmill.

He found that it was both cheaper and more fulfilling to make his own tools, explaining that “it was more of a necessity and a curiosity that started the blacksmithing…and then I found out that I liked making tools better than using them.”

Charles has been passing on his knowledge and experience to Cameron Lewis, currently a freshman in high school, who became interested in blacksmithing by reading books, in particular the book “The Lost Hero,” by Rick Riordan, which features the character Hephaestus, the Greek god of the forge.

Lewis, son of WKU photographer Clinton Lewis, just made his first knife blade. He hopes to eventually sell the things that he makes. Lewis said he plans to continue learning as much as he can about blacksmithing, and that one of the most important rules while working near a forge is to “treat everything as if it were hot.”

While there is not a huge woodworking or metal-smithing community in Bowling Green, there are still artists in town who sculpt or weld.

Chris Radus is a maintenance technician with WKU Facilities Management and a friend of Hurst — and a fellow blacksmith. He currently has two pieces on show at the Kentucky Museum for the US Bank Celebration of the Arts.

Radus began blacksmithing at a young age with a coal fireplace in his basement, and began by making knives. He has since moved on to more sculptural and decorative pieces.

He also does commissioned pieces and several sculptures and three-dimensional pieces.

He has a version of Picasso’s “Guernica” made out of sheet metal in his own front yard.

As far as advice for people who are interested in the craft of blacksmithing or woodworking, he urges them to “just do it.”

Radus said he doesn’t have any formal art training, but that didn’t stop him.