Stephens: Toppers (once again) have nothing to lose 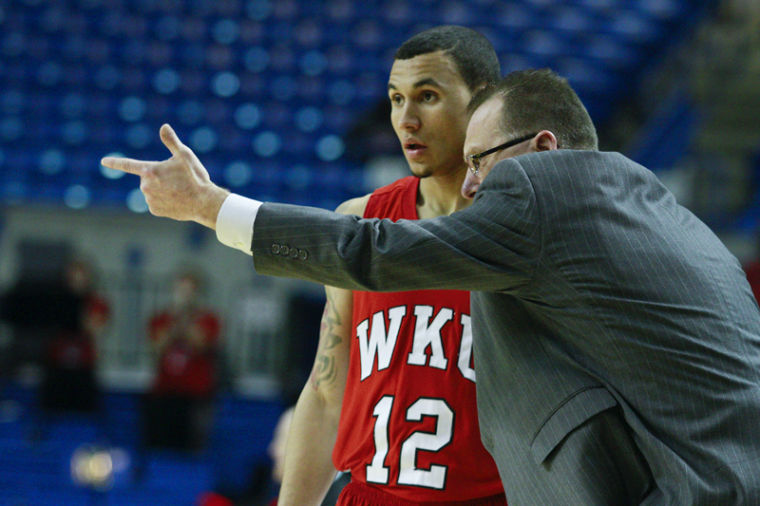 Head Coach Ray Harper talks with junior guard Brandon Harris about mistakes of the previous play in the second half of their Sun Belt Conference Game.

The few hundred people that showed up to Diddle Arena Sunday for the Selection Show watch party knew what to expect.

WKU, for the fourth time in six years and for the second time in as many years, stamped a spot in the Big Dance.

But a 20-15 record and a No. 150 RPI ensured that spot would be opposite a big, bad bully in the Second (formerly First) Round. And college basketball bullies don’t get much bigger or badder than the Kansas Jayhawks.

That’s exactly the draw WKU was given.

The South No. 16 seed Toppers and No. 1 seed Jayhawks will meet at 9 p.m. Friday at the Sprint Center in Kansas City.

Like the challenge of facing Kansas wasn’t enough, WKU must do so in KU’s backyard, in a building that was Rocking and Chalking just last weekend when the Jayhawks won the Big 12 Tournament there.

The Toppers must defend (and keep from getting defended by) this year’s likely No. 1 NBA Draft pick, super-frosh Ben McLemore.

They must put the ball in the basket while avoiding the long reach of shot blocker Jeff Withey, a 7-footer capable of turning the paint into a Dikembe Mutombo Geico commercial.

And then they must contain role players like Travis Releford and Perry Ellis, who’d star for 90 percent of the nation’s teams.

“It’s an extremely talented group,” Harper said, “and a group capable of winning the national championship.”

Does any of this (OK, all of this) sound familiar? It should.

Go back one year to this same week, after WKU beat Mississippi Valley State in a First Round “play-in” game.

The Toppers, who struggled the entire regular season but clicked in time to pull off an upset-filled Sun Belt Tourney title run, earned the prize of playing No. 1 seed Kentucky.

They had to do so at the KFC Yum! Center in Louisville in the middle of a building that was really loud and overwhelmingly blue.

The Toppers were basically playing with house money at that point. They’d impressed everyone just by getting there.

Pulling the improbable win? That just would’ve been a bonus. WKU embraced the road underdog role, played as well as it really could have, and still lost by double-digits to the eventual national champion Wildcats.

Harper, Jamal Crook, T.J. Price and the rest of the Toppers will get the challenge of a lifetime from a team and fan base hungry for a second title under coach Bill Self. No one is expecting WKU to win, and there’s probably a remote chance it actually will.

But isn’t that what makes March fun?

Expect the Toppers to go through the rest of this week in Bowling Green and later into Kansas City focused, but loose.

They aren’t the team dealing with Final Four-or-bust pressure — that’s Kansas. If Kansas loses, it’s a catastrophic meltdown that’ll haunt the fan base for years.

“It’s one of those deals where you’re extremely excited that you’re still playing and we’ll go play,” Harper said. “We’ll see what happens.”

The Toppers have nothing to lose at this point.

This week will be about them getting a once (or apparently, twice) in a lifetime chance to slay a giant in the big guy’s backyard.

A team that had about three healthy guards in late December and was 13-14 at one point is back in the NCAA Tournament. Expectations outside the program are low, but potential rewards inside it are high.

WKU has earned itself a trip back to the Big Dance. Now let’s see how long Big Red and the boys are going to stick around.