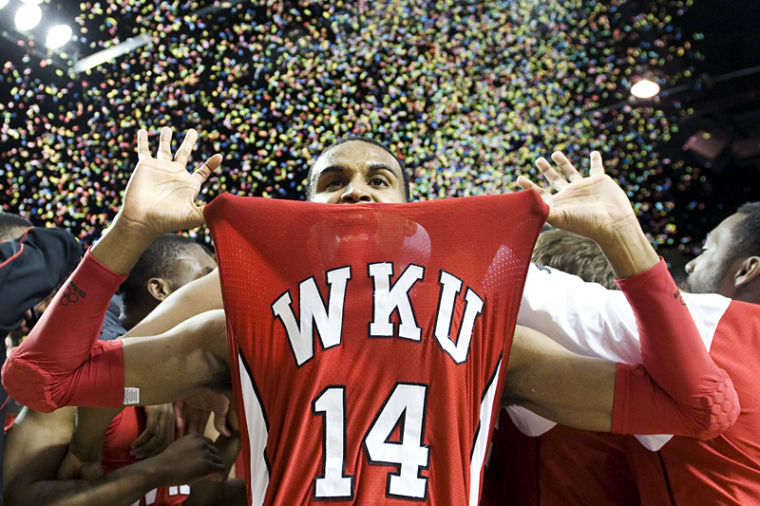 Senior guard Jamal Crook holds out his jersey while celebrating WKU's win over Flordia International in the Sun Belt Conference Tournament final to clinch a spot in the NCAA tournament.

The rumors, projections and bracketologies surrounding WKU right now can be maddening.

Will the Toppers, as projected by CBS Sports, be a No. 15 seed, playing No. 2 seed Michigan State in Auburn Hills, Mich?

The truth is that outside of a lonely selection committee boardroom in Indianapolis, no one will know until the Selection Show airs at 5 p.m. CT Sunday on CBS.

That’s why coach Ray Harper said his WKU squad, recently crowned as Sun Belt Conference Tournament champs, is trying not to worry with what the Joe Lunardi’s and Jerry Palm’s of the world have to say.

“Not really” was Harper’s response to a question about whether he cared when, where and against whom the Toppers would play.

“We’ve got a lot of tape on everyone,” Harper said. “Today’s technology, it’s not hard to get multiple tapes on anyone that you want.

“We’ll be prepared and, obviously, calling some friends in the business and getting some scouting reports as well. The main thing right now is to take care of ourselves.”

This process for the Toppers has some similarities and differences to last year, when they went to the NCAA Tournament after winning the Sun Belt title.

In 2012 WKU players and coaches knew they were destined for a First Round “play-in” game in Dayton, Ohio. The team entered the tournament with a 15-18 record, the worst of any team in the 68-school field. The Toppers ended up as a 16 seed in Dayton, beating Mississippi Valley State and advancing to a Second Round game against No. 1 seed Kentucky, which they lost.

This year WKU’s 20-15 record will still likely have it at the bottom of the field. However its RPI (154 as of Thursday) is higher than that of three teams which have also already clinched automatic berths — LIU-Brooklyn (180), James Madison (182) Liberty (288).

Therefore it’s looking likely the Toppers will be able to avoid the play-in game this season.

Senior point guard Jamal Crook echoed Harper, saying he’ s not concerning himself with whether WKU goes to Dayton or anywhere else.

“A couple of my teammates,” Crook said, “they talk about it, ‘We may play this, we may play there, I would like to play this team, not to play that team.’

“It really doesn’t matter at the end of the day, we just have to go out and play.”

WKU fans, coaches and players can all find out the Toppers’ NCAA fate together. The school is hosting a Selection Show watch party Sunday afternoon in Diddle Arena. The event is free and open to the public.

Sophomore forward George Fant said that regardless of what news comes from Sunday, he’s looking forward to the next step in WKU’s postseason.

“I heard something about Dayton,” Fant said, “but I don’t really care. I feel like we can win and advance.

“As long as we play good defense and keep winning, that’s a good thing for me.”