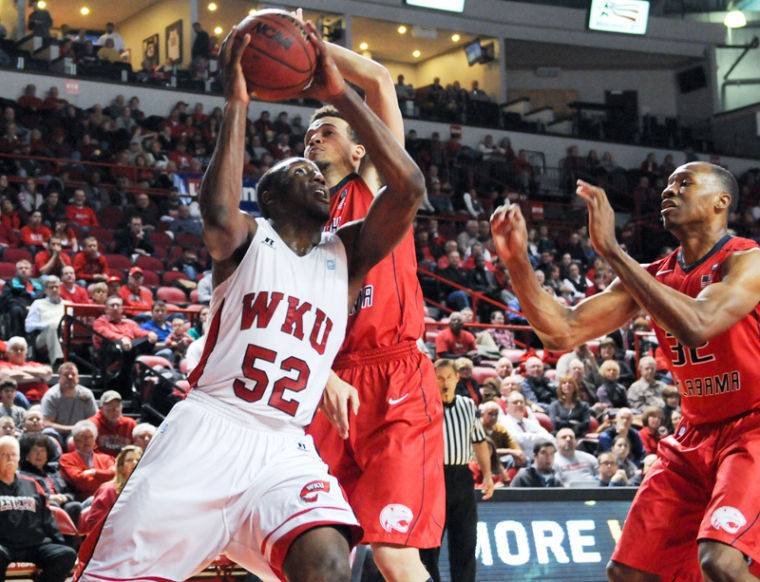 Sophomore guard T.J. price goes up for a shot against a South Alabama defender during Western Kentucky's February 28 game against South Alabama. The Hilltoppers won 79-73.

The Toppers needed to win their final two games to have a shot to earn a first-round bye in the upcoming Sun Belt Conference Tournament.

It was an important win for the Toppers. USA, which has clenched the No. 3 seed in the conference tournament, is just the second team with a winning record WKU has beat this season.

Coach Ray Harper said WKU’s newfound depth gave them the edge Thursday. The Toppers, plagued by injuries for much of the year, had 30 points from players coming off the bench and four players score in double-figures.

Sophomore forward George Fant put his stamp on the game in the second half as well. After going 0-of-6 in the first 30 minutes, Fant scored the first bucket of the second half and went on to finish with 13 points and eight rebounds.

Harris said he and the Toppers know to keep feeding the ball to Fant even when his shot is off because they know he has the ability to turn it on mid-game.

“He already knows what he can do – 0-for-6, I don’t care, we’re still going to go to him because he might go 10-for-10 the next time,” Harris said. “My mom always taught me living in Oklahoma, ‘the calm is always right before the storm, so I don’t worry too much, it’s coming.”

The first half was also won on the boards – WKU went into the half ahead 39-30 and led the Jaguars in rebounding 25-16 after the first 20 minutes.

The second half was a closer affair. WKU had to hold on and connect on free throws in the final minute to secure the six-point win.

Harper said it was a strong all-around effort from his team.

“I was proud of our guys – we competed,” he said. “Now were we perfect? By no means, but 79 points, shooting (57.1) percent in the second half – we’re getting better and we’re capable of putting some points on the board right now.”

The Toppers will put their three-game winning streak on the line at home tomorrow against Middle Tennessee State.

The Blue Raiders, who beat the Toppers 72-53 in Murfreesboro in January, are the No. 1 team in the Sun Belt, with one loss in 18 conference games this season.

Harris said it’s important for WKU to hold on to the momentum the Toppers gained against South Alabama as they prepare for the league’s top team.

“Any win is a good win – it puts a smile on our faces,” he said. “Like coach always talks about getting that momentum. Going into the next game and the next game letting it carry over. Three in a row? Lets try and make it four Saturday.”