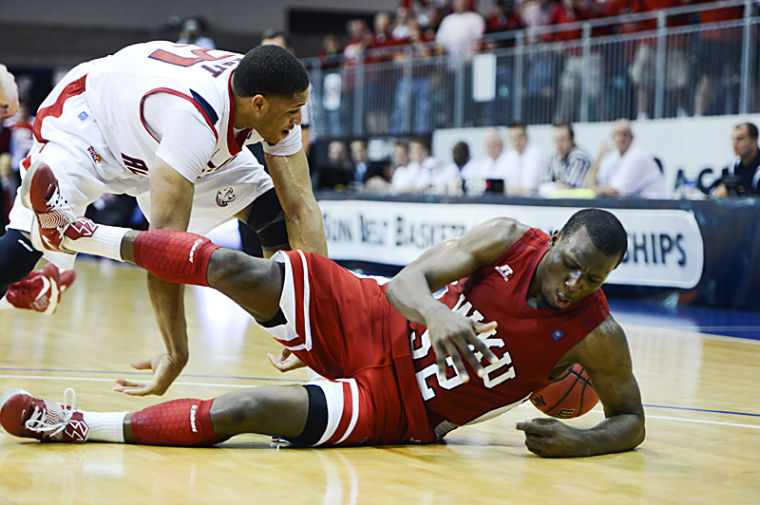 Sophomore guard T.J. Price and South Alabama junior forward Augustine Rubit dive for a loose ball during the second half of their second round Sun Belt Conference Tournament game.

HOT SPRINGS, Ark. — A couple of last-second steals were the difference between the Toppers heading home Sunday or playing in the Sun Belt Conference Tournament semifinals.

Senior guard Jamal Crook had the first one. With 18 seconds to go and WKU down 59-58, Crook pick-pocketed USA guard Barrington Stevens III at halfcourt and took it to the hoop to give the Toppers a one-point lead with 17 seconds left.

“Once I saw the ball in front of my eyes I saw daylight, so I went for it, I got it, and I got the bucket,” Crook said.

While that steal ended up leading to the game-winning bucket, the Toppers were able to put the icing on the cake in the next possession.

Junior guard Brandon Harris stole the ball from USA forward Augustine Rubit with 10 seconds to go — he was immediately fouled.

Sophomore guard T.J. Price caught the ball on the ensuing inbounds pass and was fouled with nine seconds to go. He hit two free throws to extend the lead to three.

Two missed 3-point attempts later, the Toppers were headed to the semifinals.

Fant shuts down Rubit from the field

Coming into Saturday, coach Ray Harper stressed how important it would be for WKU to play lock-down defense against Rubit.

Rubit, the Sun Belt Conference Player of the Year, came into the game averaging 18.9 points and 10.8 rebounds.

Harper said Friday that the key for WKU would be to try and slow down the forward while also making sure no other USA players stepped up in his place.

The Toppers succeeded on both counts. While Rubit finished with a team-high 22 points, he shot 4-of-18 from the field and earned 14 of his points at the free-throw line, where he connected on 14-of-16 attempts.

USA had one other player score in double figures — senior forward Javier Carter had 11 points on 4-of-6 shooting — but no other player recorded more than six points.

“(Rubit)’s going to get to the free-throw line some — now, 16 is a lot — but credit our defense,” Harper said. “We didn’t let one of those other guys go off and have a big night.”

Sophomore forward George Fant deserves the lion’s share of the credit for shutting down Rubit.

Fant played Rubit close in the paint all night while putting up impressive numbers of his own — he finished 7-of-10 from the field with 18 points and nine rebounds.

“He’s a good player,” Price said. “You have to front him – we talk so much about staying in front, you can’t play behind him regardless of how big you are because he’s so good with his back to the basket.”

What looked like a potential landslide win early ended up being one of the closest games of the season for WKU.

The Toppers couldn’t miss from the field early, connecting on their first four 3-point shots and rushed out to a 22-5 lead.

Harper said the Jaguars deserve a lot of credit for getting back into the game so quickly.

“I thought defensively we were pretty good, especially early in the game,” he said. “We had a chance right there early to really bust that thing open, we allowed them back in it and I think you have to give them credit for getting back in the game.”

Crook said WKU took its foot off the gas after getting that big lead.

“We got kind of lazy a little bit,” he said. “We were feeling ourselves at the beginning and we kind of relaxed. Coach talked about being mature and that’s one thing we’ve got to focus on and look ahead, just kind of find ways to sustain the lead.”