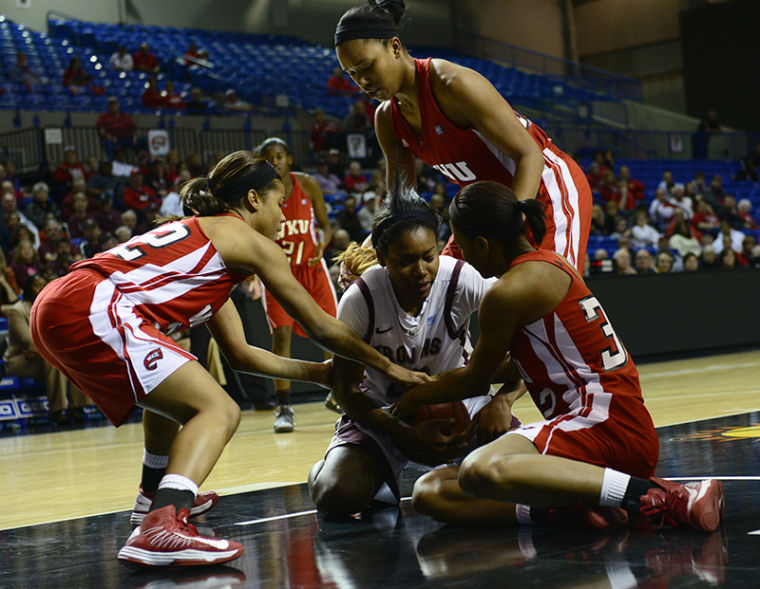 No. 2 seed UALR ran roughshod over No. 3 seed WKU 74-54 in the Sun Belt Conference Tournament Semifinals.

UALR had 20 assists to WKU’s six. The Trojans had six turnovers to the Lady Toppers’ 19. UALR had 27 points off those turnovers, compared to two WKU points off Trojan turnovers.

Four UALR players scored in double figures. Meanwhile it was Alexis Govan (29 points) or nothing for the Lady Toppers.

UALR was the superior team Sunday afternoon any way you looked at it.

“They were feeling it,” WKU coach Michelle Clark-Heard said of the Trojans. “…This was their night and that’s how it goes sometimes.”

Clark-Heard called the loss “bittersweet,” which is a good way for the Lady Toppers to look at it.

This WKU team had a Sun Belt title in its sights after starting the year 15-3 overall and 7-1 in conference play. That fast start far surpassed anyone’s expectations for the Lady Toppers in Heard’s first year as head coach.

The former Lady Topper forward inherited a tough situation when she was hired in March. Heard took over a WKU program that limped to a 9-21 record in 2011-12 in its last season under Mary Taylor Cowles.

The first order of business was trimming the fat off the team by parting ways with several players that made little positive impact in 2011-12.

Those moves left just 12 players on the Lady Topper roster, 11 of which were on scholarship. The team got even thinner soon after the season started when Danay Fothergill transferred to Lipscomb and Kendall Noble sustained a season-ending knee injury.

With such a thin roster, everyone was expected to contribute on the court. Still there were three players who were going to make or break WKU’s chances — Govan, sophomore forward Chastity Gooch and McGee.

When those three were on, WKU was going to be tough to beat. Sunday only one of that trio, Govan, was effective.

Gooch finished with her school-record 24th double-double of the year (11 points, 13 rebounds) but played most of the second half with four fouls, turned the ball over six times and was shut out from the 1:23 mark of the first half to the 1:07 mark of the second.

McGee, one day after scoring WKU’s last 10 points of the game in a quarterfinals win over No. 11 seed Louisiana-Lafayette, was held scoreless with five turnovers.

“As we were coming off our ball screens we kind of let them body up on us and I think that, in some instances, affected Bianca a little bit,” Heard said.

Gooch’s struggles and McGee’s absence from the offense put the pressure on Govan to get the job done on her own.

Her 29 points tied her with Jamie Walz’s 29 points against FIU in 2000 for the third-most points scored by a Lady Topper in a Sun Belt Tournament game.

But WKU isn’t at its best when Govan has to score nearly 30 points to keep up with the opposition. The Lady Toppers are better served when Gooch and McGee score 12-17 points themselves and provide different ways to attack a defense.

Relying on three players to provide most of the scoring and a general lack of size were the primary weaknesses of this team. Those are things that will get fixed in coming years when Heard has some time to sculpt an entire roster with her recruits.

What this year’s Lady Toppers did was re-establish the program to a point to where some of the problems of the past (spotty effort, relative dysfunction) aren’t issues anymore.

Heard has the ship pointed in the right direction and in a year or two WKU may be the team dishing out 20-point defeats in the Sun Belt Semifinals rather than taking them.

As for this year’s Lady Toppers, their season likely isn’t yet over.

WKU’s RPI has stayed in the low-90’s, high-100’s area for the last couple of weeks. That number should make the Lady Toppers a prime candidate to play in or even host a game in the 64-team Women’s National Invitational Tournament.

Don’t be surprised to see a well-rested Lady Topper team win a game or two in the WNIT.

A program that’s talked all year of being “On the Rise” is certainly headed in the right direction. It’ll just be a little while longer before WKU is all the way back to the top.