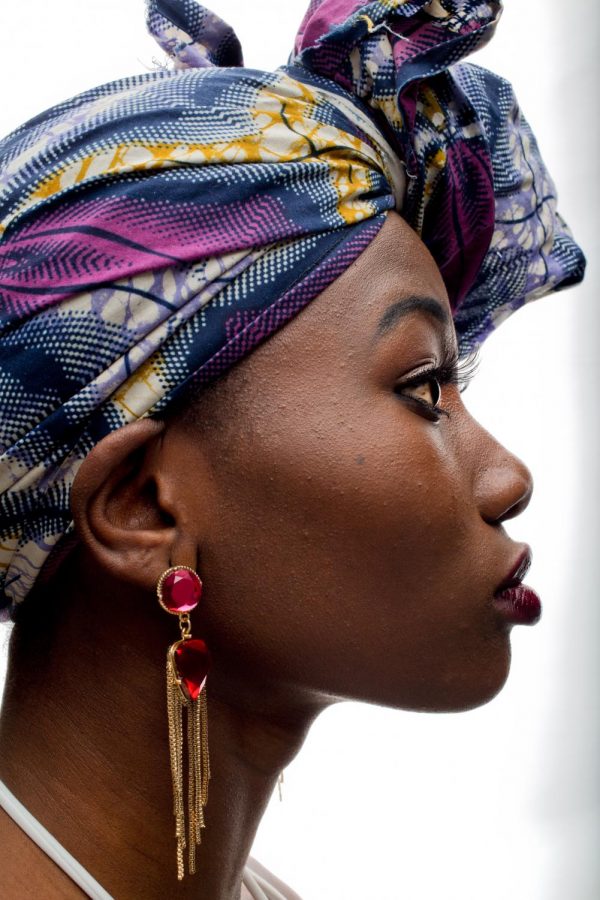 Gloris Akakpo wears Ankara cloth, which is typical of her native country of Togo. The cloth was given to her by her grandmother Afiwa, who still resides in Togo. Akakpohopes to become a model after he moves to New York city in the summer.

As college students, it seems we’re constantly changing our minds about what we want to do in life. There are so many options that it’s hard to choose what we feel we’re destined to do.

This is not the case for Gloria Akakpo, an 18-year-old freshman originally from Togo who spent most of her life in Louisville.

Akakpo feels that she is destined to be a high-fashion model. She even recently auditioned for the television show, “America’s Next Top Model” in Detroit.

“It was very nerve-wracking, but at the same time, one of the most exciting and unbelievably interesting experiences I’ve ever gone through,” Akakpo said. “I saw lots of people with the same dreams as mine, and started thinking, ‘Am I going to make it? Am I good enough to be here? Should I just go back?’ I’m from Kentucky and most of the other girls were from Detroit, so I was an outsider just trying to be accepted into something I had always wanted to do.”

Despite recently finding out she didn’t make the cut, Akakpo isn’t going to let that stop her modeling dreams.

“I just felt like it was God saying it wasn’t my time to do this,” Akakpo said. “I’m kind of thankful because I would have had to stop this semester and it gives me time to reflect, work on myself and make my inner-self a better person.”

Akakpo is remaining strong and feels that this is just one step closer to what she wants to achieve.

“If I have everything handed to me, then what does that make me?” Akakpo said. “I have to go get it. It’s not going to come get me.”

McKenna Means, an 18-year-old Florence freshman and friend of Akakpo’s, sees the perseverance that Akakpo has.

“She’s the type of person that is really passionate about everything she does and if she wants something she’s going to get it,” Means said. “You can tell that she’s going to go far.”

When it comes to body image, Akakpo feels that every woman is insecure in some way.

“It’s insane to me that we judge each other based on what society and others put out there and want,” Akakpo said. “We should all just embrace our beauty and accept ourselves because, at the end of the day, no one on this Earth can judge you. We’re all on the same level. No one’s above the other.”

Akakpo also hopes to combat some of the negative connotations that are associated with today’s models.

“I don’t want any girl, teenager or woman to think, ‘I wish I was her,’” Akakpo said. “I don’t want to be a model to make others feel bad. It’s all about self-empowerment and feeling good about yourself. You can’t expect to have the same life as someone else.”

Akakpo does indeed have a drive for this and doesn’t plan on stopping anytime soon. She has hopes of creating an empire, which includes expanding into fashion, acting and maybe even having a talk show or writing a book one day.

“I know I’m no one right now, but I’m definitely going to be someone tomorrow.”