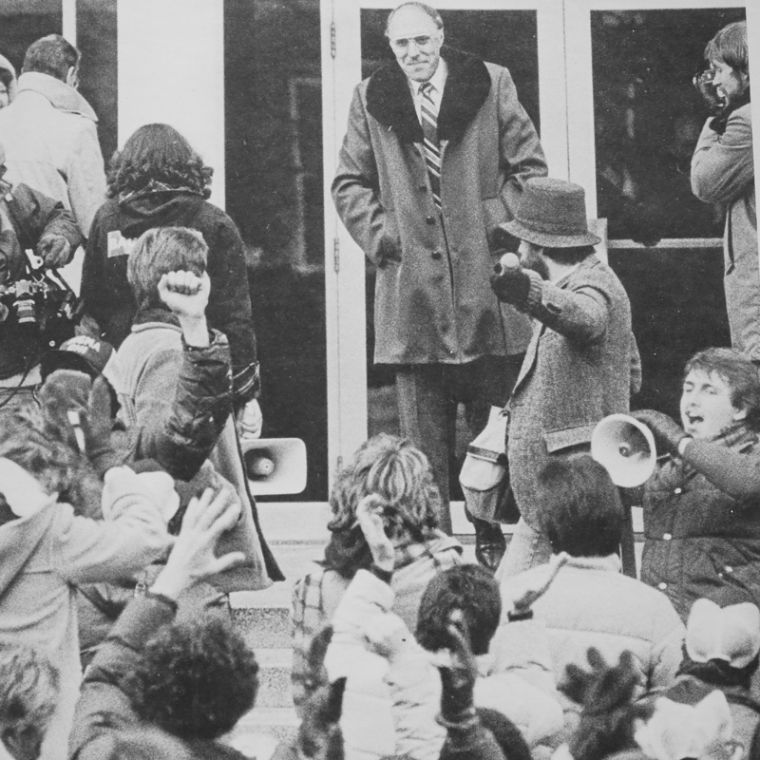 Students rally to support then-President Donald W. Zacharias in 1981 as he fought to preserve funding for WKU.

When Donald Zacharias was president of WKU, he had students rallying behind his cause to get more state funding.

In 1981, students could be seen on campus wearing “Back Zack” stickers, to show support for their president’s pleas for the state to give WKU more money instead of cutting their budget while the University of Kentucky and the University of Louisville received more money.

President Gary Ransdell said Zacharias had been suffering from a degenerative neurological disorder for the past several years.

Ransdell said he and Zacharias, who served as president from 1979 to 1985, had a close personal relationship while they worked together at WKU, and kept in touch afterward as well.

“He really became my mentor professionally,” he said. “He was the one individual with whom I talked prior to every professional move I made from 1981 on, and sought his advice and trusted his advice.”

Ransdell said they kept in touch even when he was at Southern Methodist University and Clemson University and Zacharias was president of Mississippi State.

Their friendship continued throughout the years, and they made sure to keep in touch by talking over the phone two or three times a year and visit with each other.

“He was president here when I was young in my career, but he took a personal interest in me and we just became close, personal friends,” he said.

“As a person, he was congenial,” he said. “His style was warm, yet business like, and I think only an outstanding, trained communicator can do that.”

While Bailey didn’t have a close, personal relationship with Zacharias, he had direct communication with him.

“He carried Western through one of the state’s severe budget cuts and was able to protect the institution from what could have been a very damaging elimination of funds,” he said.

Cecile Garmon, a professor of communication and director of the School of Leadership Studies, worked for Zacharias as a staff assistant in the president’s office.

“I worked with him quite closely, actually. I hated to see him leave,” she said.

She said Zacharias was dedicated.

“He was a very kind person, very focused on hard work and was the best read person I ever knew,” she said. “He read voraciously and had great interest in promoting Western as an academic institution.”

She said with the difficult budget situation at the time, the students rallied around him.

“It was an interesting time because they were very enthusiastic about backing his efforts to support the university,” she said.

Garmon said he influenced her.

“He was a very strong influence in my developing life — developing in higher education — he was a mentor that I appreciated a great deal,” she said.