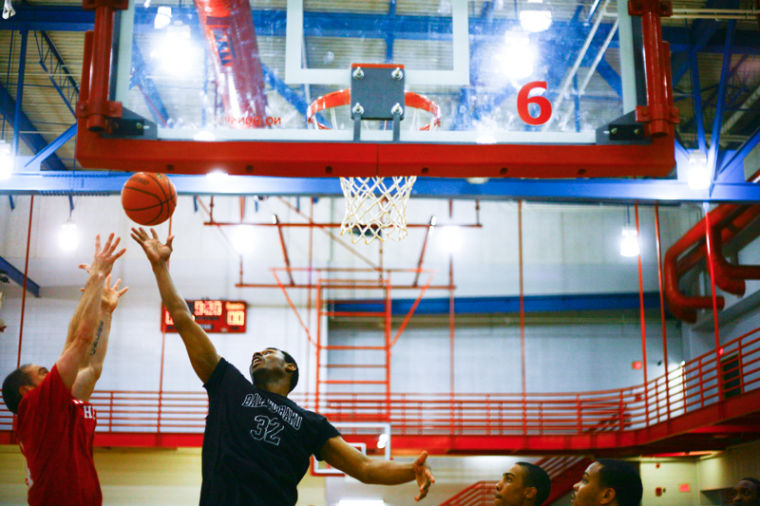 A team member of Ball So Hard attempts to recover a rebound shot during his team's game against If He Dies He Dies at the 2013 Kappa Delta Shamrock Shootout on Sunday, March 24 at the Preston Center.

People who love both basketball and helping others got a chance to spend their weekend at Kappa Delta sorority’s 11th annual Shamrock Shootout at WKU.

The Shamrock Shootout, a five-on-five basketball tournament, raises money through team-entry fees and other donations for children’s charities with the winner of the tournament receiving a cash prize.

The tournament had double elimination play on Friday, its first day, with a bracketed tournament on Saturday.

“It’s something completely different than anyone else on this campus does,” Koppel said.

Koppel said the community has responded well to the annual event.

“It’s really worked for us,” she said. “I mean, obviously Kentucky’s a huge basketball state, and it’s just really been a hit.”

The event didn’t just have players from around the region. Some of the spectators were also from outside the Bowling Green area, including University of the Cumberlands student Drew Morgan.

“I go to a smaller school,” he said. “And it’s kind of cool to see a big school come together with such a big event.”

With 11 years of history behind it, the shootout had a few players competing who had been in the tournament from the first year, or close to it, such as Randy Kessler, who was on a team from Evansville, Ind.

“It’s the only place where we can go now and play for two days straight,” Kessler said.

Though his team, E’ville’s Finest, dropped in the quarterfinal round of this year’s event, Kessler’s team has had success in other years.

Kessler has been competing since the event’s second year, he said. In that time, he has been to the final four three times and once placed second in the tournament, he said.

Eric Davie, of Cincinnati, is the captain of this year’s winning team. He has been playing in the Shamrock Shootout since the first year, he said.

“It’s been great,” he said after winning his fourth Shamrock Shootout. “They put on a great thing and to look at where they were to where they are now, it’s been a great step.”

Davie also said he liked to see the proceeds go to charity.

“It’s for charity so, everything goes out towards the kids,” he said.