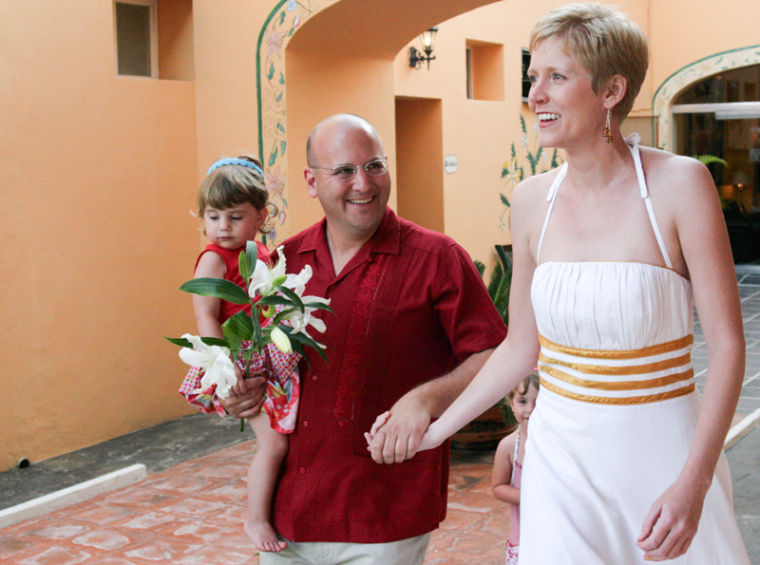 Holli Drummond, associate professor of sociology, and John Dizgun, assistant director of the Kentucky Institute for International Studies, walk down to the courtyard of a hotel in Merida, Mexico to their wedding on June 15, 2008. Dizgun holds his niece, Megan Dizgun, 3.

It is not uncommon for professors to lead study and research trips abroad. However, very few professors decide to get married abroad.

John Dizgun, assistant director of the Kentucky Institute for International Studies, and Holli Drummond, an associate professor of sociology, held a wedding ceremony in Mexico back in 2008.

Dizgun said that he and Drummond first met at a WKU faculty party in the fall of 2004.

“I walked into the party and there was this new face I had never seen before,” Dizgun said. “I chased after her, and we started hanging out from that point forward.”

Dizgun said after he dated Drummond for three years, he proposed to her in an empty Argentine restaurant in San Cristobal, Mexico while on a Study Abroad trip in January 2008.

“There was nobody else there at the time, so we had the whole restaurant to ourselves,” Dizgun said. “And I proposed to her that evening.”

Drummond said they were officially married in January after the couple returned to the states after their Study Abroad trip.

“We went to the courthouse, and we got officially married in about a two and a half minute courthouse ceremony,” Drummond said.

Drummond said she and Dizgun invited 30 of their friends and family to Mérida, Mexico in June 2008 for the wedding ceremony.

“It was a very organized experience for the group of 30 people,” Drummond said.

Amy Krull, associate professor of sociology, who was a guest at the wedding, said she enjoyed the ceremony.

Drummond said that she and Dizgun didn’t have any interest in the ceremony being religious due to their different cultural histories.

“I grew up in Alabama, and he grew up in Montreal, Canada,” Drummond said. “I was raised Southern Baptist, and he is Jewish.”

After they were married, Drummond said she converted to Judaism.

During the ceremony, religion was not excluded entirely. Drummond said that religion was emphasized to the extent that their guests wanted to bring it up.

“We certainly wanted religion to be represented in reflection of the people we had invited,” Drummond said. “And the way religion was important to them.”

Drummond said that on the day following the wedding ceremony, she and Dizgun took approximately half of their wedding guests on a three-day trip to Cancun. Following that, the couple took their parents on a six-day tour of southern Mexico.

“We went to an additional Mayan ruin, we went to a beautiful lake, and then we ended up in Tulum,” Drummond said.

Drummond said she and her husband spent a week by themselves in Belize for their honeymoon following the six-day tour.

“We did snorkeling and checked out the Barrier Reef,” Drummond said. “And then we headed inland to San Ignacio and looked at another Mayan ruin. We ended up in a beautiful pine ridge forest.”

Drummond said that their relationship has significantly impacted their professional roles.

Marci Morehead, Purchasing Pro Card Program coordinator, a friend of the couple, said the marriage looks positive from outside perspective.

“They look very happy,” Morehead said. “I think they have a great partnership.”