Basketball notebook: Withey too much for Toppers down low 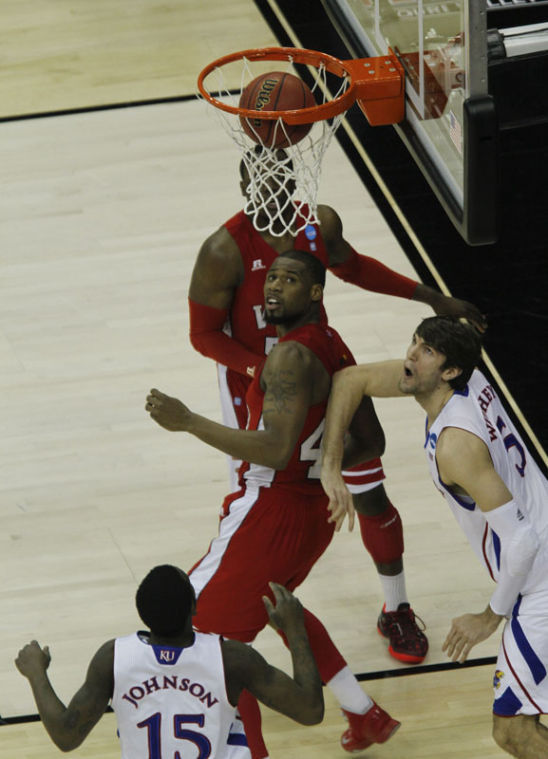 WKU sophomore forward George Fant (#44) and KU senior center Jeff Withey (#5) watch a Kansas basket score during the first half March 22 at the Sprint Center in Kansas City, Mo. WKU led 31-30 at half before going on to lose 64-57.

Withey, the Big 12 Defensive Player of the Year and second-team all-American, finished with 17 points, six rebounds and seven blocked shots.

WKU sophomore forward George Fant battled Withey in the paint all night. He said the 7-0 center wasn’t the Big 12 Defensive Player of the Year for nothing.

“He’s a long, athletic guy,” Fant said after the game. “I credit him a lot for how he played tonight. He’s a load.”

Withey’s impact in the paint forced WKU coach Ray Harper to make some adjustments — he even had Fant playing the point at times on Friday.

Harper said he moved Fant’s position as a direct result of Withey’s game in the post.

“We said, ‘Okay, if he’s going to guard George, then we’re going to spread this thing,’” Harper said, “let George be the guy to make some decisions with the basketball.”

Senior guard Jamal Crook played like it was his last game in a WKU uniform Friday night.

He said he’s looking forward to watching the Toppers in the future.

because I know how hard these guys can work,” Crook said. “I’ve been through it with them. When they’re down, in the back of their heads, I know they have that fight in them.”

Harper said it hurts to see one of the guys who laid the foundation for this team to leave — a four-year senior, Crook had been with the Toppers for two losing seasons before helping to lead them to two consecutive NCAA Tournaments.

“I told Jamal this might be the end of his college career, but his journey has just begun. He knows we’ll be there every step of the way as he goes along this journey.”

A big factor in the loss to the Jayhawks was WKU’s poor shooting in the second half.

Harper said those missed shots were the difference.

“Sure, we didn’t have some shots go in that we normally make,” he said. “But that’s the game of basketball, guys — it’s a game of inches.”

Kansas keyed in on sophomore guard T.J. Price and it showed — after averaging 18 points a game en route to being named the Sun Belt Conference Tournament Most Outstanding Player, he connected on just 3-of-13 shots Friday and finished with 13 points.

Several other Toppers also struggled — junior guard Brandon Harris finished 1-of-7 from the field and junior guard Caden Dickerson missed all five of his shot attempts.

Fant said the Jayhawk defense was tough but it just wasn’t WKU’s night from the floor.

“I had a couple of looks myself,” Fant said. “A couple of my other players had a couple looks. Sometimes the ball just doesn’t go in for you. That’s just what