‘Can You Duet?’ talent show raises money for charity 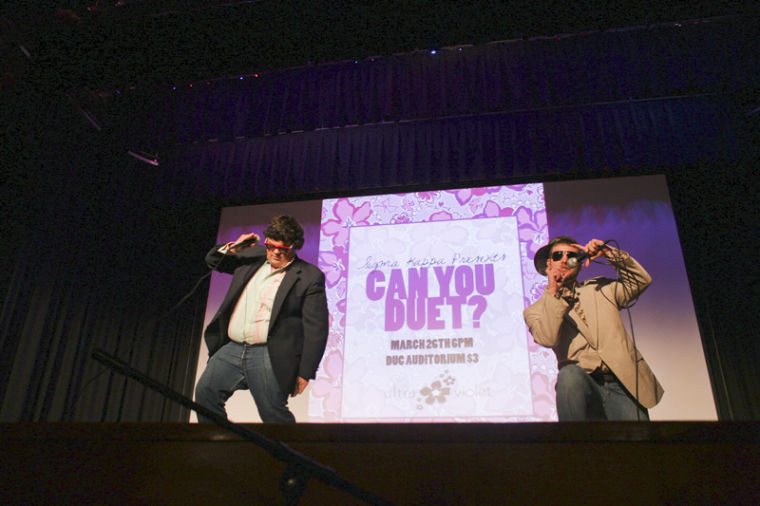 J.D. Biddle, left, 22 and Andy Wilson, 19, were the opening act of Sigma Kappa's "Can You Duet?" show, which raised money for Alzheimer's research. "We didn't decide to do this until about 9 p.m. last night," Biddle said. "We sing it a lot around the house…and just thought it'd be fun."

Singing, dancing and raising money for charity brought Greek organizations and WKU students to the fourth annual “Can You Duet?” talent showcase.

Tuesday night’s show in the Downing University Center auditorium, sponsored by Sigma Kappa, consisted of an hour of duets performed by students, with all proceeds going to charity.

Louisville freshman Hannah Dickerson came out to the event to show her support.

“I came out to support my sisters of Alpha Xi Delta,” Dickerson said.

Louisville freshman Sarah Peebles, however, came to the event for a very different reason.

“I loved the Fijis,” she said. “They sang Taylor Swift. They had my heart.”

Among the organizations competing in the showcase were Alpha Gamma Rho fraternity, Chi Omega sorority, Phi Gamma Delta fraternity, Phi Mu sorority and Alpha Xi Delta sorority. A wide range of styles was shown by the Greek talent that performed in the showcase.

“We forgot the words,” Doose and Profancik said, almost simultaneously. “We just picked up and went on through, and it went fine,” Doose said with a smile.

For the fourth year in a row, Sigma Kappa has put this event on, and not without work on their part.

Volunteers from Sigma Kappa greeted everyone at the door, sold tickets and acted as the show’s hosts. But one person in particular who put a lot of work into the event was Louisville sophomore Ashley Presnell, Sigma Kappa’s vice president of Philanthropic Services.

The proceeds from the event go to Alzheimer’s and gerontology research, the Inherit the Earth foundation and the Maine Sea Coast Mission, Presnell said.

Scores of Greek and non-Greek affiliated students alike turned out to support Greek life at the event, give to a variety of great causes and have fun watching the variety of talents onstage.

“I’m very happy with the turnout. We had more acts this year,” she said. “This keeps getting bigger every year.”