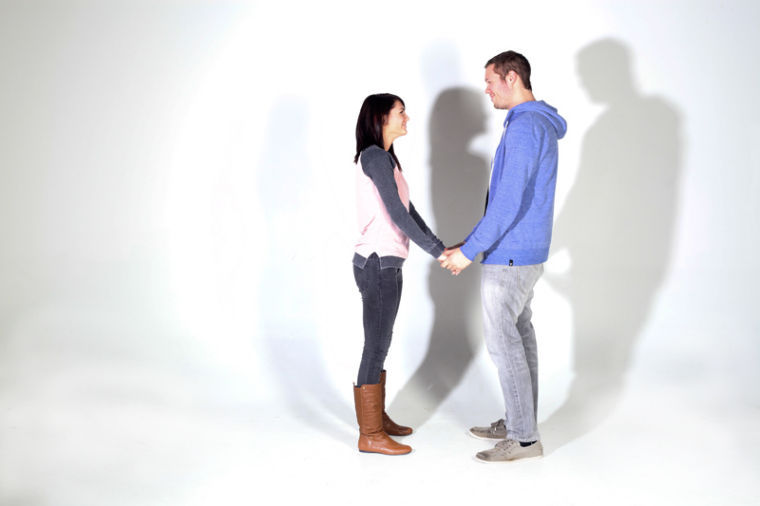 Greenville senior Sean Emory, 24, recently proposed to alumna Andrea Leachman, 23, of Bardstown, at the "Kissing Bridge" with leaves and dirt. Emory has been doing magic for seven years and has been performing at events for five years. Emory does card, psychological and side show tricks. Leachman is supportive of Emory’s magic. “I think that he’s an actual artist,” Leachman said. “He’s got a real artistic and creative mind. He comes up with his own way of doing tricks.”

When couples envision their wedding proposals, they always hope for the moment to be magical.

For one WKU alumni couple, “magical” described theirs all too perfectly.

On Dec. 10, 2012, at WKU’s “Kissing Bridge,” Sean Emory proposed to his girlfriend of five years, Andrea Leachman, in the form of a magic trick.

“I came up with the lamest magic trick so she wouldn’t think it was anything big,” Emory said. “And it worked because she had no idea.”

Emory, an illusionist, speaker and missionary, met Andrea at WKU while he was a resident assistant in Barnes-Campbell Hall. Andrea, who was living in Bemis Lawrence Hall at the time, said she knew Emory was different after three days of knowing each other.

The couple just celebrated five years together. They both live in Nashville, where Andrea manages music artists.

When Emory was planning his proposal last year, he said he thought the area around the “Kissing Bridge” was a pretty spot with historical significance.

“I guess we broke tradition by doing it underneath,” he said about his decision to propose on the path below the bridge.

“I was super excited,” said the 19-year-old WKU freshman from Bardstown. “I’d been waiting for this forever. I was glad he told me.”

On the day Emory proposed, Allison was eating lunch with Andrea while he was preparing on top of the Hill.

“He called her while we were eating and asked if she could come up and film a magic video,” Allison said.

Little did Andrea know, she would be filming her own proposal.

“If he had done anything super grand scale, I would have known immediately,” Andrea said. “I think he really wanted that element of total surprise, so he took something average and made it awesome.”

Video of the proposal has become a YouTube sensation, reaching over 700,000 views. The couple’s story has been featured in several publications and even on Good Morning America.

Emory said he always wanted to do something big for the proposal.

“I guess I ended up getting what I asked for, because a lot of people saw it,” Emory said.

Andrea said there was lots of media attention towards the couple the first week after the video was uploaded.

“It was crazy and surreal, but so much fun with everything coming in,” Andrea said. “Definitely a once-in-a-lifetime thing.”

Emory said he spent time in prayer about doing something amazing and making history, or keeping it simple.

“With limited resources, I chose to go the intimate, personal route,” Emory said. “The irony is that it totally made history.”

The couple said wedding planning is turning out to be very interesting and fun, and they’ve set the date on May 4 of this year.

Allison said she’s looking forward to what the couple has planned for the wedding.

“I don’t know what they’re going to do, but they said magic might be involved,” Allison said. “Hopefully they think of something really awesome for the wedding to top the proposal off.”

To see the magical proposal and some of Emory’s other magic tricks, search ‘Sean Emory’ on YouTube.