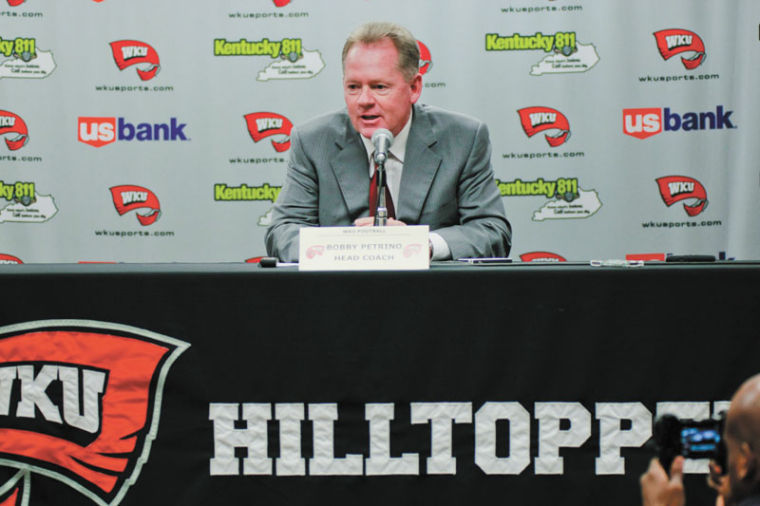 WKU Football Head Coach Bobby Petrino speaks at a press conference in the media room of Diddle Arena on Wednesday.

WKU is introducing the first signing class under new coach Bobby Petrino today. While the school will hold a press conference at 3 p.m. to announce the signings, the College Heights Herald will be spending the day getting in contact with recruits as Letters of Intent are faxed to WKU. Be sure to check back here for updates.

Players who have sent WKU a Letter of Intent:

“You’re getting a very athletic quarterback. He’s got a try athletic arm and is very mobile. He throws very good off the run and is certainly a dual-threat kid. He definitely has the ability to make all the throws.

“He’s got a very high football IQ and I think that’s his thought process going in there, to get in there and compete and go in with the thought process that the job is up for grabs. I definitely think he can go in there and validate himself.” -O’Fallon Township High School coach Brandon Joggerst.

“I’m also a combo player, so being able to bring punting to the special teams is a triple-threat, really. I can hit really long field goals and I know that’s been a struggle that they’ve had lately, being able to hit 40-yard field goals.

“In the Central Michigan game (the Little Caesars Pizza Bowl), they could’ve hit the field goal to tie but they decided to go for it. I believe that I’ll be able to hit long field goals for them.” -Occhipinti.

“The school is beautiful and coach Petrino really had an impact on me, as well as coach Holt, my position coach.

“I believe my speed off the edge for pass-rushing will really help – that’s what coach (Petrino) said. He said he’s looking for guys who’ve got speed and can get around the edge fast and sack the quarterback, so that’s what I’m hoping to do.” -Reeves.

“He’s a hard worker. He likes to train. his dad is a coach also in Florida so he understands, he’s seen what it takes to be successful at (the college) level. If he makes a mistake, he’s fast enough to run it down.” -Southwestern (Ca.) College coach Ed Carberry.

“A great citizen, a great teammate. The one thing about him is he really only played two years of football. He’s got so much football ahead of him. He’s just such a great athlete and he’s been able to pick it up and play at a real high level. He’s going to have a chance to be a really good one.” -Royal Palm Beach coach Willie Bueno on Simmons.

“You can’t coach size and he’s got it. He’s big, physical, he’s got good agility. He can play either side of the ball and that’s a plus as well. He’s got the ability to play offense or defense just depending on the scheme and what they want him to do. They get a versatile lineman.” -South Fort Myers coach Grant Redhead.

“Davis has an internal knack for getting to the football, he’s as good as any player that’s come through here.” -Bob Jones coach Kevin Rose on Davis.

“Ray is an extrpemely physical player. He won’t talk a whole lot, but he will perform on the field.” -Rose on Ray.