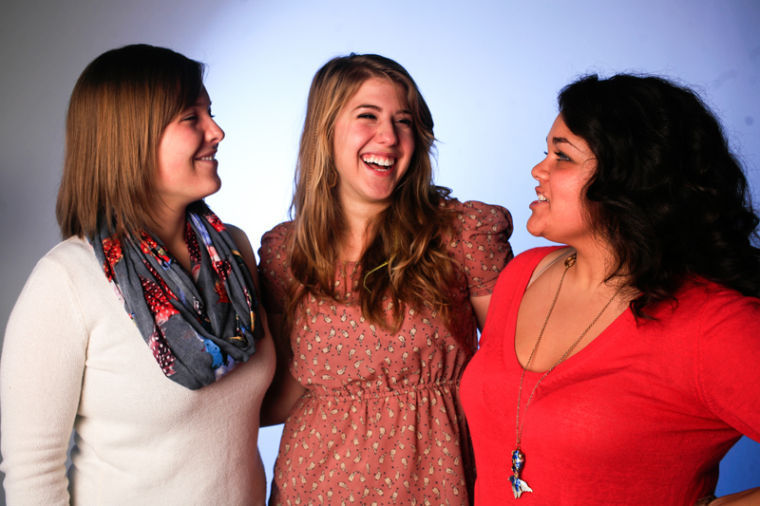 From left, junior Aly Badinger of Crestwood, Becky Thieman of Louisville and Lendee Sanchez of Somerset all support each other in keeping Gluten out of their diet. Each girl has a different reason for not eating Gluten, but all of the girls say that it is a challenge everyday.

Changing your diet usually means trying to lose weight. Sometimes, though, that change is required for more than just looks. Going gluten free has given many people the opportunity to fix digestive problems within their bodies.

“I just wanted to see if it’ll make me feel better,” Sanchez said.

Sanchez said she has a family history of stomach and colon problems, so she spoke to a doctor about options to change her diet and lifestyle.

“The doctor said sometimes gluten allergies don’t manifest obviously,” she explained. In that case, changing her diet to gluten-free might benefit her even though she didn’t know something was wrong.

This is something Badinger can personally identify with.

“I would have mood issues and was extremely lethargic,” Badinger said. “Digestively, not happy.”

Thieman had a different reason to quit gluten, she said.

“It isn’t technically an allergy, but I have really bad blood sugar problems,” she said. “The doctor suggested taking gluten out this summer, and it’s helped with a lot of my health issues.” Thieman said. She said it’s gotten to the point where if she eats gluten, it will make her sick.

While Sanchez has been transitioning to eating gluten free, she has noticed how difficult it is to completely change her diet.

“I love bread,” Sanchez said. “I mean, I love it. But I can’t have it. I bought a loaf of brown rice bread. It’s a really rough alternative to real bread.”

Thieman said the hardest thing about gluten-free bread is that it’s made with rice.

“Bread is hard,” she said. “If it’s rice based, it crumbles. It just disintegrates. If you make a sandwich with it, when you go to bite into it, it’ll fall apart.”

Not only was it hard to give up favorite foods, but switching to gluten free also required Sanchez, Badinger and Thieman to completely change their shopping habits.

Sanchez said she has to read food labels carefully because sometimes items that claim to be gluten free are processed with foods containing gluten. Thieman agrees.

“When I go home to Louisville, I shop at the Whole Foods there,” Thieman said. “I look like an extreme couponer, but I’m really just stocking up on food for school.”

“When you first change over, you just eat corn and rice,” she said. “But then you figure out foods that you like, and you don’t mind not having it in your diet.”