Harris getting back to natural shooting guard role 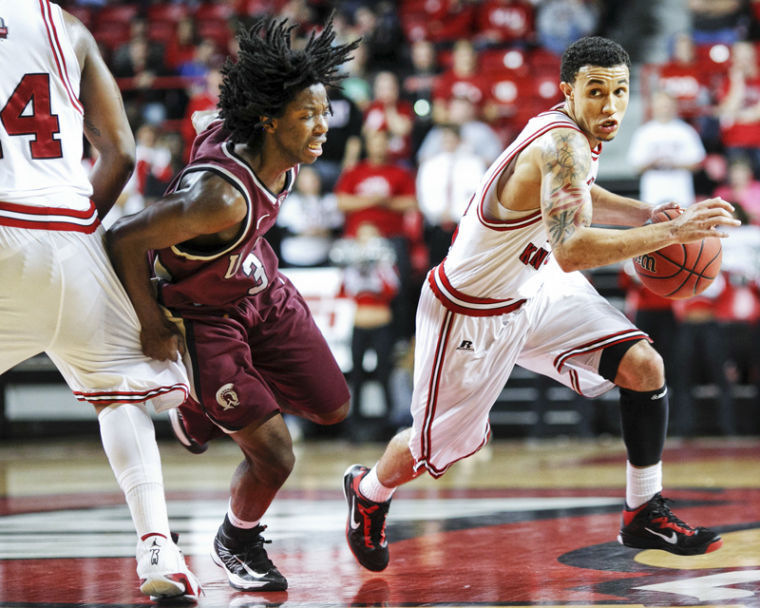 Junior guard Brandon Harris (12) drives past the UALR defense in the second half at E.A. Diddle Arena in Bowling Green, Ky. on Saturday Dec. 19, 2013.

The Topper depth chart has changed on a nightly basis this season thanks to a slew of injuries and inconsistent play.

Junior guard Brandon Harris, however, has established himself as the most consistent piece in the WKU lineup.

Harris, playing in his first season a WKU after transferring from Otero Junior College, has contributed across the board this season, averaging 6.3 points, 2.3 assists and a team-leading 6.3 rebounds per game.

He has introduced himself to Topper fans this season by spending a lot of time on the court – one of three WKU players to appear in every game so far this season, Harris has played a total of 737 minutes this year, far and away the most on the team and over 100 more than his closest competition, sophomore forward George Fant.

His minutes went through the roof when senior point guard Jamal Crook suffered a broken foot in early December.

Playing an entire game without a break is tiring but Harris, who played the full 40 minutes twice in those 12 games, said he thinks he elevated his game in the time he spent at point guard.

While Harris may have improved over that 12-game span, it seemed like the Toppers did not. WKU went 3-9 in games without Crook and averaged just 58.2 points per game.

With the senior point guard back in the lineup, Harris has shifted back to playing shooting guard

Coach Ray Harper said the struggles during that stretch were a result of more than just the injury to Crook, as WKU was also without junior guard Caden Dickerson and sophomore guard Kevin Kaspar for significant portions of the run.

“(Harris) got forced into that position not only because Jamal was hurt, but because Kevin was hurt,” Harper said. “Kevin is our backup point guard but he was not healthy enough to do it, so we were forced to play with Brandon there.

Harris, Crook and the rest of the Toppers took on North Texas yesterday after the Herald’s press deadline and will face Arkansas State at home Saturday at 7 p.m.

While he considered the extra playing time a gift, Harris had to tone back the full-court press during that stretch so he could conserve energy to make it the whole game.

With Crook and the rest of the WKU rotation gaining health, Harris said that’s all about to change.

“I couldn’t really do that playing 40 minutes a game like I wanted to because I just knew my body probably wouldn’t be able to sustain it,” Harris said. “But now with everybody coming back, it’s going to help me a lot more on the defensive end.”