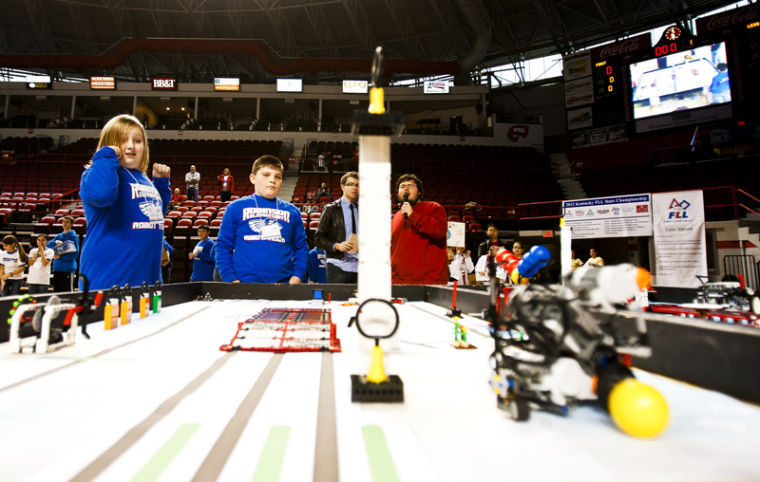 Robinson Elementary Jay Bots Preston Pollard, 12, and Dawson Messer, 11, tense up as they get toward the end of a run during the 2012 Kentucky FIRST LEGO League state robotics championship in Diddle Areana on February 1, 2013.

Kentucky students came to WKU Saturday to apply mathematics and scientific skills in a robotics competition focused on helping the elderly.

John Inman, event manager, said the championship is like a sporting event.

“These kids, lots of them don’t play any sports, then come out here with their posters, signs, chants,” he said.

The students, aged 8 to 14, programmed and built robots out of LEGO materials to perform tasks on a game board — tasks intended to mirror what senior citizens do in their daily lives, such as exercise, quilting, cooking and gardening.

“It’s a great way to introduce them to science and technology and get them excited about being engineers and scientists,” he said.

The game board’s design mirroring challenges the elderly face was a part of this year’s theme for the event: Senior Solutions. The students also prepared and presented projects aimed at helping the elderly.

She works in WKU’s Center for Aging and is working on her master’s degree in health care administration. The Baby Boom generation, she said, will be of particular concern in the future.

Grant’s Lick Elementary’s project aimed to alleviate loneliness among seniors, a problem the team discovered occurred due to people getting older and their friends and loved ones dying.

“They discovered that their loneliness was the key to deterioration of people’s health,” Strange said.

The students’ project involved hand-making and delivering greeting cards to residents at a local nursing home — in addition to the robot-building.

“We put all this stuff together,” said Grant’s Lick fourth-grader Michael Leicht. “We all have fun together, and we learn core values.”

Those core values from the FIRST LEGO League include teamwork, friendly competition, sharing of experiences and gracious professionalism.

The team that wins the competition’s Overall Championship Award also has the opportunity to compete at the FIRST LEGO League World Festival in St.Louis, Mo. This year’s winner was the home school team, “Automaticus Rex.”