Back to The Future: Future headlines crowded concert 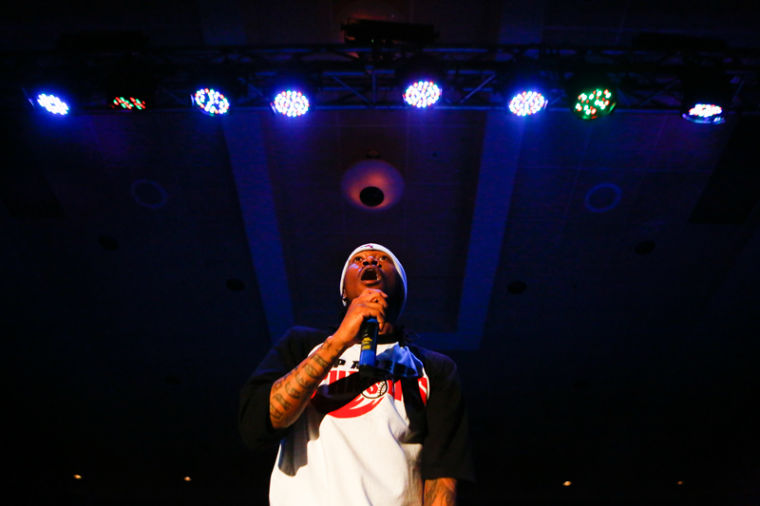 Student promotion group Startin5ive brought the rapper to town and had been advertising the show for more than a month.

Startin5ive, known for bringing celebrities such as Pleasure P, Ray J, Soulja Boy and more, was assisted by another company, I65 Nation, to make the show happen.

Before the doors opened, students were lined up, anticipating the “Turn On the Lights” singer’s concert.

The show started off with DJ Crisis from radio station The Beat Jamz 101.1, who played music as the audience arrived.

“The energy was amazing,” Carpenter said.

He said Future gave people a “bang for their buck,” and they would bring him back to Bowling Green if they get the chance.

“It was a lot of great feedback from the WKU community, which we really appreciate; without them, there is no us,” he said.

Opening acts, such as YMF la Familia of Louisville and local Bowling Green rappers, came out before Future to hype up the crowd.

Once they announced Future was coming out, the crowd went wild, pulling out their cameras and phones, ready to capture the “Magic” singer’s performance.

Future came out to rapper YC’s “Racks,” a 2011 hit single he was featured on, and everyone began dancing and singing along with him.

Other songs he performed were “Tony Montana” and “Never End.”

Future interacted with fans, pointing to them, touching their hands and asking them questions that led into the next songs.

“He gave a lot of energy to the crowd,” she said. “It was like he put his heart out and gave Bowling Green a performance that they would never forget. I feel like the people who came out and got to experience the concert had a great time.”

She thinks the group’s hard work in getting Future to come to Bowling Green really paid off.

Future ended the concert by thanking everyone for coming out and with a final song, “You Deserve It,” from his album, “Pluto.”

Nashville student Patrick Morgan, of Startin5ive, said there was a really good turn out.

Carpenter said there were about 1,200 people in the audience.

“I’m pleased with the outcome. Hopefully, bigger and better will be coming soon,” Morgan said.

Tallahassee, Fla. freshman Ervin Montgomery was a Future fan before he worked with Startin5ive on this concert, and his favorite song of the night was “Turn On The Lights.”

“I thought the overall concert was great,” Evans said. “He delivered to the crowd.”