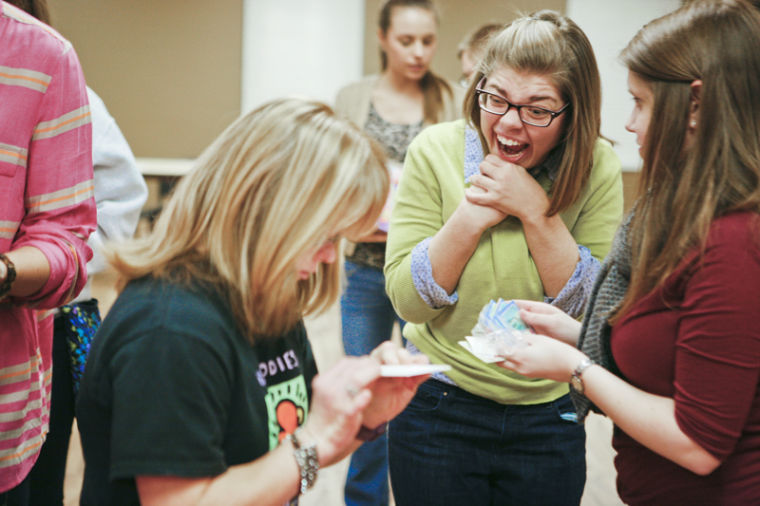 Jenna Greer of Bowling Green is excited about giving out valentines at the Best Buddies Valentine Exchange on Monday at Hillvue Heights Baptist Church.

The organization, which pairs college students with people with disabilities, commonly referred to as people with intellectual and developmental disabilities (IDD), facilitates the growth through friendship.

“I want my son to be a part of his community, not just a visitor,” said Leisa Hutchison, the faculty adviser for Best Buddies at WKU.

Her son has FG syndrome, also known as Opitz-Kaveggia syndrome or FGS1, which affects verbal and communication skills.

With a town the size of Bowling Green, she believes there is great potential to make her personal philosophy happen on a large scale.

WKU Best Buddies has been on campus for three years, and is about to undergo some positive changes.

Bowling Green senior Sarah Fitzpatrick, the president of the group, said a new Buddy House next to Booth Fire and Safety downtown is having its ribbon cutting ceremony on March 21.

“The Buddy House will be somewhere for them to go after high school,” Fitzpatrick explained.

She said people with IDD can stay in high school until they turn 21 years old.

“It’s really sad for them to leave high school, because they’re left out of the community then,” Fitzpatrick said. “Then a parent has to quit their job or they are put into adult day care. Neither of those are good.”

Instead, people with IDD can go the Buddy House. It has a fully-functioning kitchen and laundry room, and gives them the opportunity to learn everyday tasks that other people take for granted.

For Bowling Green sophomore Katherine Devine, the most common way people discover Best Buddies is by word of mouth.

Devine said she’s very close to families with children who have disabilities, and that sense of community is how others get involved. When Devine heard that Sarah Fitzpatrick was recruiting for Best Buddies, she was immediately interested.

Devine was paired with her buddy Brittany Hunt in the fall of 2012 when she joined the group. Both attended the event Monday night.

Devine said she knew Hunt previously from church. Hunt has been in the group for several years, and had one other buddy who graduated last year.

“We will probably remain buddies for a while because we really click,” Devine said.

Hunt knew Devine’s older brother who also had a disability before he passed away in 2006.

“It’s really cool that Brittany’s my buddy, because she knew my brother,” Devine said. “Most of my friends now never got to meet him, but Brittany did. She knows the origin of why I want to help those with special needs, and that’s just really cool to me.”

She also dances on a team for people with IDD called the Rockers. She has been dancing since she was about 18 years old.

Devine and Fitzpatrick agree that all people with IDD want is to be treated the same as everyone else.

“People treat those with IDD differently, because they’re intimidated or don’t understand them,” Fitzpatrick said. “But they want to be just like you and me.”

She said it’s all about inclusion and welcoming those with IDD into our community.

“One of the things Best Buddies lives by is the saying ‘we want to put ourselves out of business,’” Fitzpatrick said. “If everyone treated people with IDD the same as everyone else, we wouldn’t need to be here.”