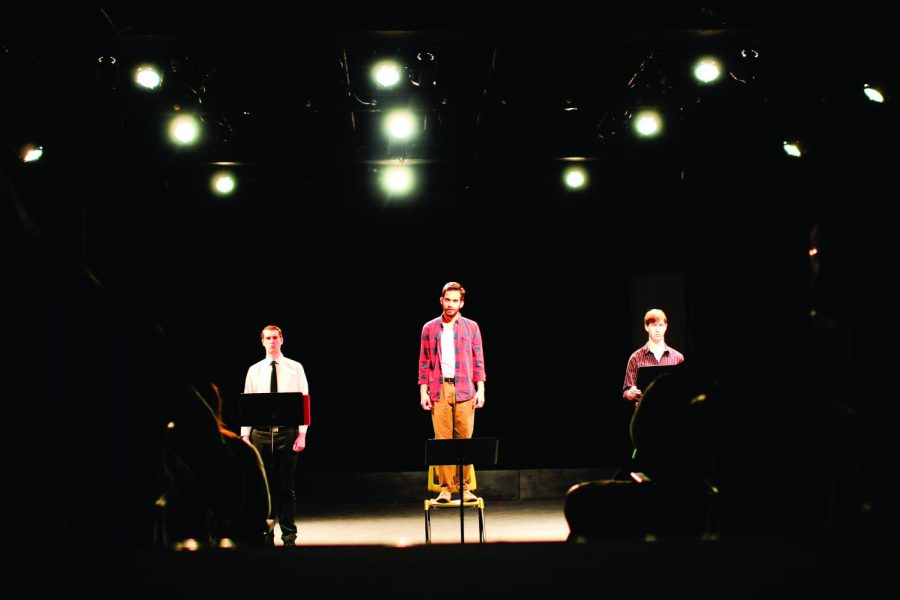 WKU’s Gordon Wilson Lab Theatre was busy with people this weekend for the 10 Minute Play Festival on Friday night and Saturday afternoon.

Michelle Dvoskin, an assistant professor in the department of theatre and dance, organized the event.

“I think the development of new work is a really exciting thing for people to be a part of,” she said. “Whether it’s as directors, actors, the writers…and audience members.”

Dvoskin said participants came from all over WKU even though the theatre and dance department sponsored the festival.

“We invited any student at WKU, regardless of their department, to submit a 10 minute play for consideration for the festival,” she said. “Those were due over winter break.”

Dvoskin said that after all the submissions were received, the authors of the plays were made anonymous and were then selected by a committee from the department of theatre and dance.

“We read all of the submissions and chose six,” Dvoskin said.

Topics of the plays ranged from a traitor communicating with his soon-to-be executioner on a military base, to a father struggling to cope with the death of his daughter, to two sisters reminiscing over their relationship with their deceased grandmother after a card game.

Louisville senior Meg Kennedy was one of the six playwrights whose play was selected for the 10 Minute Play Festival.

“My play is called ‘Waiting for God’ and it is about a character who has recently died and is in an eternal waiting room awaiting judgment,” the 21-year-old English major said.

Dvoskin said that the idea for the event generated from the interest of the students.

“A couple of years ago, a visiting faculty member had done something similar and there was a lot excitement around it, and students were hoping we could do something like that again,” Dvoskin said.

David Doolittle, a recent WKU graduate from Louisville, was an actor in one of the plays. He said he had to undergo preparation after receiving the part.

“I had to get the part, rehearsed a couple of different times, met with the director, the playwright as well and tried to understand what they wanted from the production,” Doolittle said. “And then we were also able to say how we felt about our characters and ran through it a few times.”

Dvoskin said she was pleased with the festival overall, and she hopes it will become an annual event.

“I was incredibly happy, I thought it went really well,” Dvoskin said. “The audience seemed excited, and we had a great house which was wonderful.”

“I liked getting to see lots of different people on stage with lots of difference experience levels,” Cuskey said. “I know the playwrights are from all over, majors-wise, so I think it was really fun to blend so many departments.”