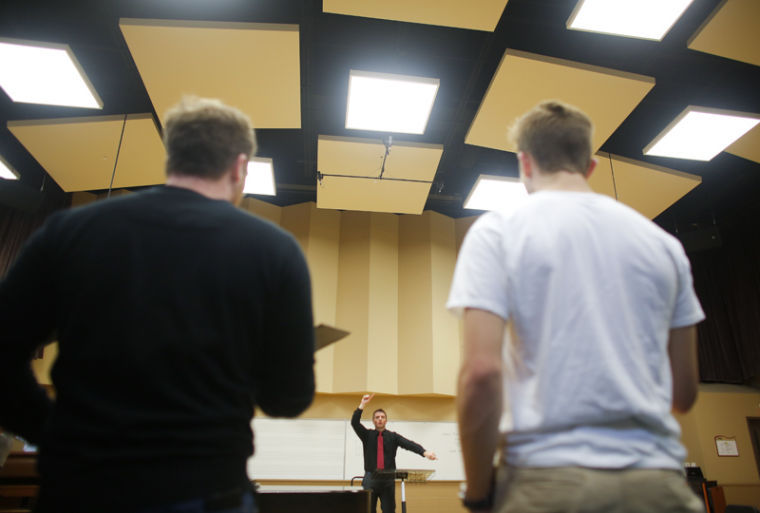 Some professors commute from Chestnut Street, others from Hardin County, while Jonathan Palant commutes more than 700 miles every week — twice a week.

The new faculty member, who flies back and forth from Dallas, is currently the Visiting Professor of Music/Director of Choral Activities while Dr. Paul Hondorp is away on sabbatical. During his time here at WKU, he will be leading Men’s Chorus, Chorale, Choral Society and teaching a course on choral methods.

Palant said Hondorp called him this past summer to ask if he’d be available to cover his position. Then the rescheduling and negotiations started.

“I had another community chorus and church position here in Dallas that I was not willing to give up,” Palant said. “So, we organized the class schedule so I’d be done by early afternoon on Thursdays to fly back to Dallas and could fly back to Bowling Green Sunday night or Monday morning. Then, I said, ‘Absolutely.’”

Back home in Dallas, Palant is the minister of music at Kessler Park United Methodist Church. His book, “Brothers, Sing On!” will also be released this spring, according to his website.

Despite the busy schedule he’ll be taking on this semester, he said it’s worth it because he’s so passionate about music — particularly choral music. Palant said choral music is such an important part of his life because of the possibilities for emotional connections to the text.

“As singers, we are connected to words,” Palant said. “We use poetry to express our inner music.”

Mitzi Groom, the music department head, said she feels fortunate to have Palant at WKU this semester.

“He comes to us with an extensive choral background and will be able to continue in the fine choral footsteps of Paul Hondorp that we have come to expect as our benchmark,” Groom said.

Palant said his first week of classes was terrific and makes him optimistic about the rest of the semester.

“I’m already very fond of the students, their passion, their caring for one another and their sincerity,” Palant said. “They’ve already made a mark on me. And we’re having fun. That’s the important part.”

Elizabeth Beach, WKU Chorale member and Palant’s graduate assistant for the WKU Men’s Chorus and the SOKY Choral Society, said she is excited to get the opportunity to be both under his direction in an ensemble and to be beside him, learning from him on the other side of the podium.

“He’s very personable, always willing to answer my questions and help me with anything I ask of him,” Beach said. “He has the rare ability to make a rehearsal fun and entertaining while also keeping his students learning. He should be a blast to work with throughout his time here.”

Palant said he hopes to encourage the musicians he works with at WKU to be open to new ideas. He said his students are learning how to appreciate and accept a new conductor and a new way of interpreting music.

“There are no two painters that paint the same canvas,” Palant said. “I’ll paint my own canvas here, and students can appreciate it as a different one. Then, they can go into the world and paint their own canvas.”