Toppers get back on track with two wins 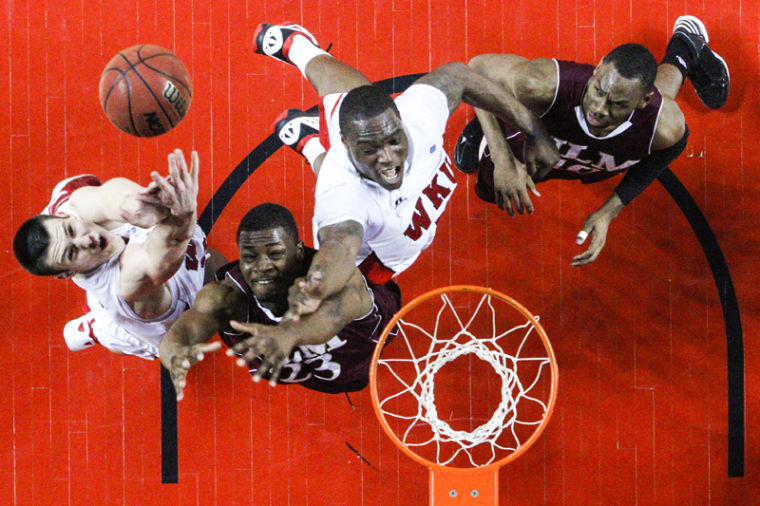 Western Kentucky Hilltoppers and Louisiana Monroe Warhawks fight for a rebound during the WKU vs ULM game at Diddle Arena on Thursday. WKU won 75-57.

WKU took a big step towards securing a first-round bye in the upcoming Sun Belt Conference Tournament over the weekend.

The Toppers, who are averaging 67.3 points per game this year, poured in buckets in wins against Louisiana-Monroe Thursday and Louisiana-Lafayette  Saturday. They beat the Warhawks 75-57 and the Ragin’ Cajuns 88-77.

The fact that the wins snapped a three-game losing streak was the icing on the cake for the Toppers, junior guard Brandon Harris said.

The Topper defense also showed improvement after giving up two 80-point games in two losses in Florida last weekend. WKU was able to to record 17 more rebounds than ULM Thursday and 11 more than ULL Saturday.

Junior forward Kene Anyigbo said the Toppers spent time on defense in practice over the week after those losses in Florida.

The Toppers shot the lights out in the first half against the Ragin’ Cajuns, hitting 6-of-10 three-pointers and netting a season-high 53 points in the first half. They finished with a shooting percentage of 50 percent from the field and 10-of-20 from beyond the arc.

Harris and sophomore guard T.J. Price were WKU’s catalysts on offense Saturday as each hit 4-of-7 three-point attempts. Price finished with 23 points and Harris finished with 16, all of which came in the second half.

Coach Ray Harper said Thursday that the game against ULM was one of Crook’s best performances since returning to the court after breaking his foot in December.

“Jamal was back tonight,” Harper said. “That’s the first time since coming off his injury that he was able to move and push the basketball, move laterally like he was pre-injury.”

The Toppers will need the good times to keep rolling this week to have a shot at earning a first-round by in the Sun Belt Conference Tournament, which starts March 8.

At 9-9 in the conference, WKU is currently tied with Arkansas-Little Rock for the fifth seed in the tourney with two games to go. The top five seeds earn a first round bye.

WKU will face South Alabama Thursday at 7 p.m. and Middle Tennessee Saturday at 5:30 p.m. in its final two games of the regular season. Both games will take place at Diddle Arena.