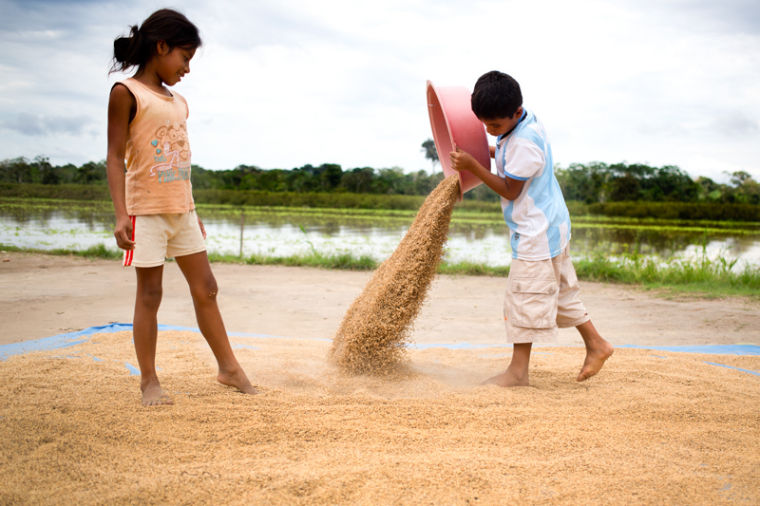 Yelba, right and Amoudi Gabriel, left, siblings in Yanashi, Peru dry rice in the sun for their family. Their father has a rice field down river and it must be dried in the sun for two to three days after picking to ensure it does not rot or sprout.

With hopes to broaden their horizons, learn another culture and research the natural wildlife of the Amazon River area, five students and two faculty went abroad over winter term to Iquitos, Peru. There, they not only studied and developed in their coursework, but they also gained personal experiences that left them wanting to return for more.

Jane Olmsted, professor and director of the Women’s Studies Program; Kay Gandy, professor in the School of Teacher Education; Christian Ryan-Downing, Sustainability coordinator; Nate Phelps, Honors professor; Brittany Sowacke, Daniel Guy and Chad Green all came together to complete a course designed to fit the educational needs and interests of the group.

Three courses were compiled for this 14-day trip: a doctoral leadership study, a graduate study course and a gender and women’s study. The students attending took each of their courses and completed research for their separate projects.

Green, the graduate student, focused his research on a more environmental issue. His topic concerned oil investments and exploration in the area and how it harms the environment and culture of Iquitos and surrounding communities.

“The Amazon in general is filled with immense amounts of oil reserves and natural resources. I wanted to find out how that was effecting the people that live there now, and in the future, environmentally and socially,” Green said. “I interviewed people who worked for those companies, a professor of ecology from the main university in Iquitos who works with clean-up efforts and talked to representatives of the president of an indigenous organization. There’s not much representation for these people in the government.”

Green said the trip benefitted him by allowing him a first chance to do a hands-on research project and wants to go back for a service project.

“Their research projects are very different and reflect whatever it is they’re working on,” Olmsted said.

Olmsted had been to Iquitos twice before venturing with this group of students. The first time, she traveled with honors professors for a national honors faculty institute. The second, she began setting up this course to take students along.

“I love this place, and I loved it the first time I went,” Olmsted said. “I don’t have any desires to take students anywhere but this place. I loved the place, I loved the people and I just felt a real affinity to go back.”

Olmsted’s curiosity is what originally drew her there, and it’s what draws others in as well. The Amazon, according to her, is something that looms largely in the collective imaginations of many.

Olmsted and Gandy had the students map out the areas they were in, whether it was Iquitos or other small communities they visited along the Amazon. They were divided into groups and were sent to learn patterns and the culture which they were to bring back to share. They also had first impression journals, where students would document their first impressions and, following experiences in places, would read aloud to the group.

Gandy has also been abroad many times, visiting countries from Chile to China. She works to help develop international experiences for students and faculty.

“You can learn so much from the people and the culture, food and language,” Gandy said.

Gandy recalls one person in particular the group encountered on their trip. While in communities along the Amazon, they met an Ursuline nun that the locals called “Sister Mary of Snows.” She had moved to that location from Canada 42 years ago.

“We spent quite a bit of time talking to her about the people and what she thought of this place, and she said she wouldn’t go anywhere else, she was so in love with the country and the people,” she said.

Meetings are beginning in the coming weeks to cement this course for another winter term. The new course will hopefully include a service-learning project. Not enough students participated for a successful service project for this trip.

Meetings will also be held to see if this could become a bi-term course.

WKU also sent other students overseas in other faculty-led study abroad programs this past winter term. Students and faculty traveled and studied in Mexico, Kenya, Yucatan, France, Ecuador, Cuba, Costa Rica or Belize, along with the group in Peru.

Jerry Barnaby, director of the Study Away program, said 114 students selected and participated in these study abroad courses for credit, and a number of them also participated without earning credit.

“(Studying abroad) provides an opportunity to take what you learn on campus and look at it from a different perspective,” Barnaby said. “Suddenly, you’re in a different place and learning to develop skills beyond that, learning how to deal with things that aren’t familiar. You’re not on your own turf, and there are different ways of doing things and different languages.”

Barnaby encourages all to study abroad, but also encourages that those interested plan ahead early enough to work out being able to attend. Abroad courses considered should also ideally fit with academic plans.

“It’s helpful beyond the classroom and compliments what you learn on campus. It’s a great opportunity to see things from a different way,” he said. “It’s not about a vacation or tour; it’s a class you’re taking on in a different location. It can be rigorous based on their guidelines. It can be demanding, but it’s also very enriching.”

Next year’s winter abroad programs are already being planned out.

“If I were to have my wish, every student would be required to study abroad,” Gandy said. “There’s such a wide world out there.”