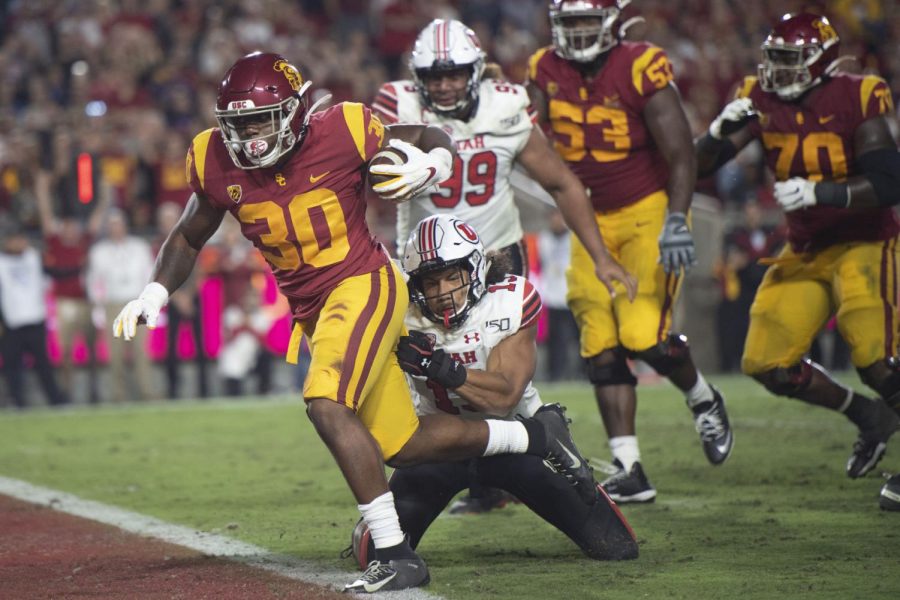 Markese Stepp, who transferred to Nebraska, scores a touchdown as a member of Southern California in September 2019 in Los Angeles. Could he make an immediate impact with the Huskers?

Nebraska’s running back room has already taken a hit to its depth this spring and on Wednesday featured only two scholarship backs available at practice.

Coach Scott Frost announced after his team’s fifth spring session that USC transfer running back Markese Stepp would miss all of spring following a recent surgery, but said he should be cleared for some activity this summer and fully ready to go this fall.

“He’ll be back this summer,” Frost said, adding that Stepp arrived on campus with a preexisting injury. “It’s something that he didn’t know about, we didn’t know about when he came in and we think it’s in his best interest to get it fixed to give him the best chance to be at his best.”

Stepp had been involved to at least some degree this spring, though, as videos released by the program showed him participating in at least one padded practice.

The other scholarship players Frost said are out for the spring include senior defensive lineman Ben Stille, who had a procedure done before spring ball started, and freshman defensive back Marques Buford Jr.

Stepp, though, is the most notable of the group because he arrived on campus hoping to use spring to catapult to the top of Ryan Held’s depth chart, and also because he was oft-injured during his three seasons in Los Angeles.

On Wednesday, Rahmir Johnson was also not taking part in practice, while redshirt freshmen Ronald Thompkins and freshman Sevion Morrison were not seen during a 30-minute window early on that was open to reporters.

That left only freshmen Marvin Scott and Gabe Ervin among available scholarship backs.

“The guys that are getting reps are going to have an advantage and have a much better chance,” Frost said. “I love what I’m seeing from the guys that are out there. Missing a couple others because of bumps and bruises, and Stepp is going to be out for a while.”

Frost echoed the compliments that Held had Monday for Ervin, the first-year freshman from Buford, Georgia.

“Overall, our newcomers, guys that should be in high school or transferred here, I’ve been very impressed with. Gabe Ervin is definitely one of the leaders of that,” Frost said. “He just has an approach like a pro, he acts like a grownup. Gets in the huddle and encourages and competes.”

Defensive line coach Tony Tuioti said he’s confident Stille will be back and, even if the sixth-year senior had been healthy, he would have seen a very light workload this spring in an effort to preserve his body and also get younger players repetitions.

“He’s doing a great job competing with the guys, watching extra film outside of my meetings and he’s doing a great job with our guys,” Tuioti said. “Seeing guys like Ty (Robinson) and Casey (Rogers) get more reps, there’s already not enough reps to go around, especially in spring ball. We need all of them to get better.

“So that’s where Stille being out helps, plus, he’s been here for a long time, so my plan with him even if he was here for spring ball was to put him on the shelf for a little bit.”

Inside linebackers coach Barrett Ruud also said that sixth-year senior Will Honas is recovering from offseason groin surgery to fix an ailment that bothered him throughout last season. Honas will be a limited participant all spring as he gets back to full health.

“Hat’s off to him to grinding through the season like he did, because I’ve had that injury, and it’s not fun,” Ruud said. “And he kind of had to limp through practice. He really wants to be full speed, not only for games, but full speed for practice all season, so we’re going to monitor him really closely this spring.”

Junior wide receiver Omar Manning was at practice but not in pads and a few others were not seen at Wednesday’s practice, including senior outside linebacker JoJo Domann and sophomore cornerback Braxton Clark.

Frost said most of them were dealing with, “normal spring ball bumps and bruises and things of that nature and we should get the rest of them back relatively quickly.”