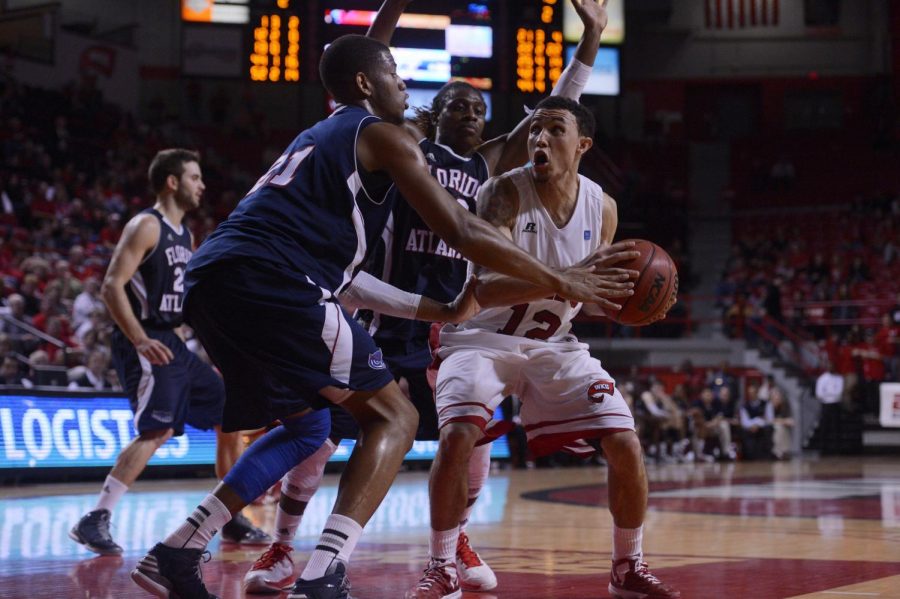 Rebounding problems hounded WKU (10-8, 4-2 Sun Belt Conference) Saturday as it fell 65-62 at home against Florida Atlantic, the third consecutive loss for the Toppers.

It was WKU’s first loss at Diddle Arena this season. The Toppers came in to the game riding a 12-game home winning streak.

Despite a close finish – WKU missed a three-pointer in the final seconds that would have sent the game to overtime – the Toppers gave up the game on the boards. FAU (9-9, 4-3 SBC) pulled in 16 more rebounds than the Toppers, winning the battle of the boards 44-28.

Sophomore forward George Fant led WKU in rebounds with a total of eight, the only Topper to record more than four.

He said the Toppers missed several chances to pull the ball in.

“A lot of guys just weren’t in there getting rebounds when we had them,” Fant said afterward. “There’s no one to blame for that but ourselves. We just have to get in there and get rebounds.”

“Rebounding the basketball takes a lot of energy in going after basketballs and they just whipped us,” Harper said.

The Topper offense ran through Fant and sophomore guard T.J. Price Saturday. Fant had 19 points and Price added 20. The guard also hit four three-pointers, including two in the final minutes to bring the Toppers back into the game.

Both were outplayed on the offensive end by FAU guard Greg Gantt, though. Gantt, who ranks No. 5 in the NCAA in points per game, finished the game with 22 points, 14 of which came in the second half.

Gantt was flanked on offense by fellow guards Pablo Bertone and Stefan Moody, both of whom recorded 15 points.

Despite strong numbers from Fant and Price, the Topper offense struggled at times against the Owls. WKU hit a total of 18-of-54 field goals, good for 33 percent, and Fant and Price hit a combined 11-of-30 shots.

The Toppers also struggled from behind the line, hitting just 4-of-20 three-pointers.

Harper said from lay-ups to three-pointers, the Toppers missed every type of shot you can take.

“You name them, we missed them,” he said. “They played good defense, take nothing away from them, but we had some good looks.”

WKU will take the court for the next time Thursday against Louisiana-Lafayette.