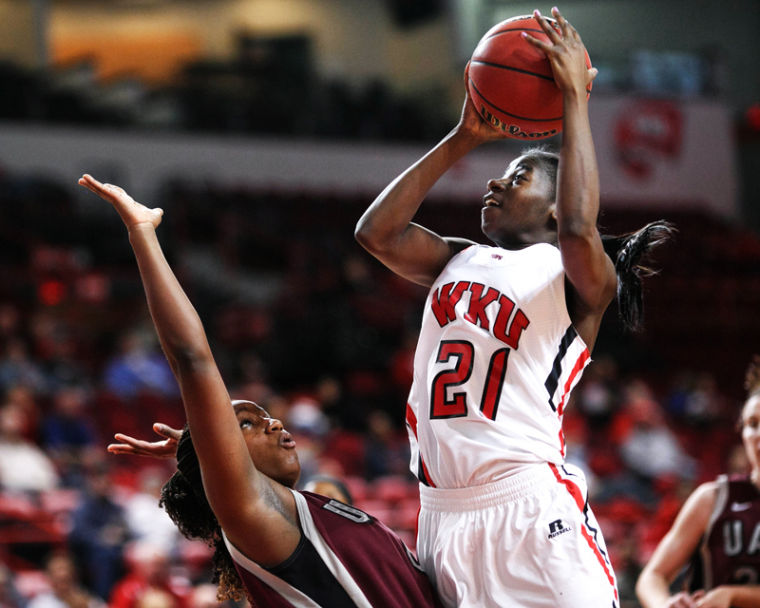 Sophomore guard Alexis Govan drives to the basket against UALR in the first half at E.A. Diddle Arena.

Winter break is a time that most students embrace as a relaxing chance to celebrate the holidays with family and friends.

For the WKU women’s basketball team, it’s one of the most grinding stretches on the schedule.

The Lady Toppers won the Wright State Invitational tournament in December and finished off the break winning eight-of-nine games overall.

The team won all five games at Diddle Arena during the stretch and the 15-3 overall record they hold is the best start to a season since the 1994-95 campaign.

But that’s not to say that every game has been pretty or that WKU (15-3, 8-1 Sun Belt Conference) is dominating with overwhelming talent.

Only two players in the regular rotation are listed at six-foot — sophomore forward Chastity Gooch and freshman forward Jalynn McLain.

With their lack of size at forward and center, the Lady Toppers are making a name for themselves as a gritty, energetic team that likes to apply pressure on defense, force turnovers and get out in transition.

“This young team has no quit in them,” Heard said. “And that’s what I’m proud of them about.”

During the break, the Lady Toppers scored 70 or more points in seven of the nine games they played.

They are ranked No. 41 in the nation in scoring offense, averaging 70.9 points per game.

Sophomore guard Alexis Govan is No. 20 in scoring in the NCAA, with 19.8 points per contest.

It was just the fourth time in program history that a player scored 40 and was only two points away from the school record.

Govan was named the Sun Belt Player of the Week for her efforts in the win over North Texas.

It’s not just Govan who can score the ball for WKU, either.

In the team’s last time out against Arkansas Little-Rock, four players scored 13 or more points.

Gooch says that the balance of scoring has been important to the Lady Toppers’ success.

For the Lady Toppers, the success they’ve had so far is nice but the team has bigger goals that still need to be achieved.

“It’s a new day today” is a slogan that Heard and the coaching staff have come up with for their team.

Heard says that earning a No. 1 seed in the Sun Belt tournament is something that the team wants to achieve.

The Lady Toppers are currently tied with Middle Tennessee for the best record in the Sun Belt Conference.

The team is hoping that the success they’ve had will carry over this week when they travel to Mobile, Ala., to take on South Alabama (11-7, 4-5 SBC).