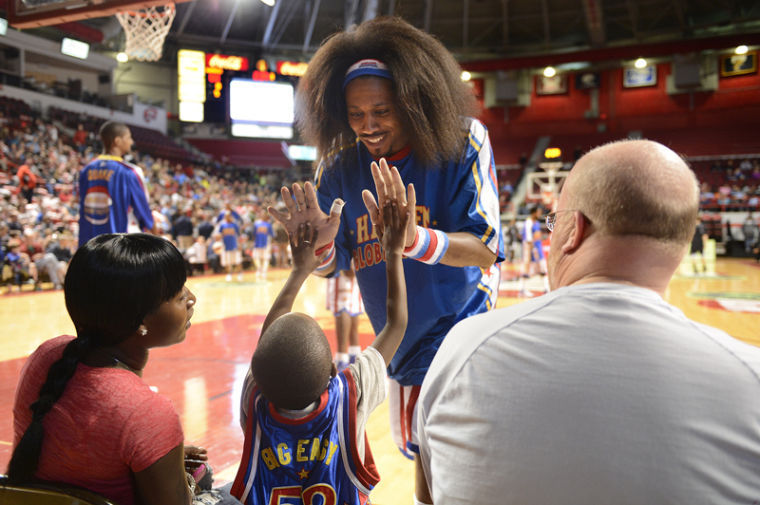 WKU hosted the Harlem Globetrotters in Diddle Arena Monday night as part of the “You Write the Rules” World Tour.

For the first time in 87 years, fans voted online for a rule to be added as a part of the game. Each rule lasted for one quarter, with the final quarter consisting of a rule based off a live applause vote. The game also allowed for interaction with the audience, bringing kids and adults alike out onto the floor to participate in the event.

Before the event, Magic Pass holders were able to spend time with the Globetrotters out on the court, practicing tricks and receiving autographs.

The game kicked off with Globie, the mascot, and his crew dancing for the audience before the first quarter rule was revealed to be the 4-point circle. This rule entailed two circles on each side of the court that were worth four points. The first quarter ended in a tie and the second quarter began with a double points rule.

Entertainment was prominent in the second quarter when Bull, number 33, jumped onto the goal, danced and proceeded to kick the basketball into the audience while still hanging on. A member of the opposing team, the Global Selects, had his pants and shirt stolen by Globetrotters and ran off the stage.

Bowling Green native Dominique Wilson and her son, DeAndre, said this was their favorite part.

“I loved it,” she said. “Especially when the other team got naked, that was hilarious. Big Easy is definitely my favorite (player).”

For the third quarter, the rule was that for the first two minutes, there were two basketballs on the floor. Stretch, number 54, took this opportunity to do a double slam dunk that helped put the Globetrotters ahead for the end of the quarter.

The last quarter rule was decided by the audience in a live vote, who went wild for the return of the 4-point circles. The Globetrotters beat the Global Selects 97-91.

Throughout the game, audience members were brought out on stage to dance, do tricks and play with the Globetrotters.

Rene Lamb, of Glasgow, enjoyed the family friendliness of the show, saying that even her 1-year-old grandson was having a good time.

“We brought our daughter and four grandkids, and we had an absolute ball,” she said. “We loved all of it.”

Angie Hudson traveled from Franklin to attend the event and liked the interactivity of the rules.

“I think it was a really good idea,” she said. “I liked the one with two basketballs.”

Her son, Jeremiah, enjoyed the new rules as well.

“The 4-point circles rule was really cool,” he said.

The Globetrotters will continue their tour throughout 270 cities within 45 states tomorrow in Murray.