Stephens: Toppers live up to their jerseys’ standards 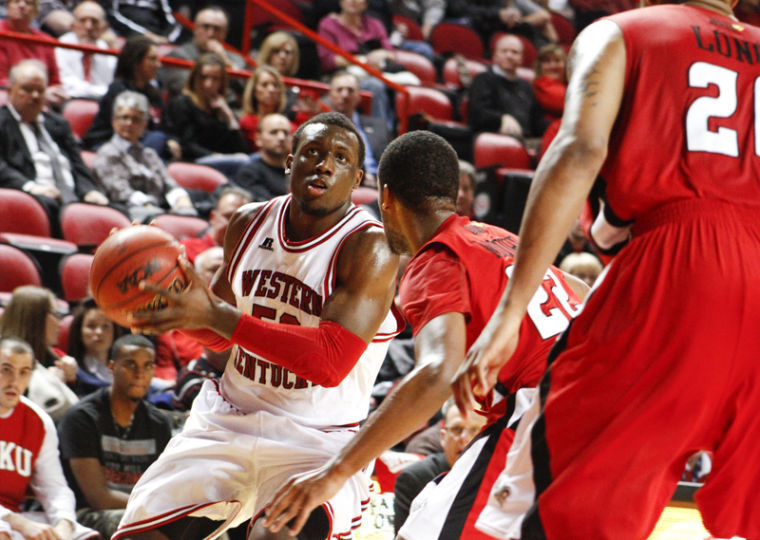 Sophomore guard T.J. Price goes for a shot during the WKU vs. Louisiana Lafayette game at Diddle Arena on Thursday, January 17. WKU won 72-49.

Look good, play good — that may as well have been WKU’s motto Thursday.

The Toppers celebrated “70’s Night” in Diddle Arena by doing something they hadn’t done since December — score at least 70 points.

They had one of their best games of the season while wearing the best uniforms they’ve worn in years — jerseys modeled after those worn by WKU’s 1970-71 Final Four squad.

For one night the Toppers put away their letters-so-big-you-can-see-them-from-space “WKU” jerseys in favor of the throwback look.

They wore “Western” over the numbers, “Kentucky” underneath. It’s a classic look, one that most fans probably prefer to the branding manual-compliant current threads.

It’s also a jersey that represents a lot of winning tradition — something coach Ray Harper stressed to his team.

“I talked to (the team) a little bit about the throwback jerseys,” Harper said. “A lot of tradition, a lot of history, a lot of winning have gone into this program. You better wear that with some pride.”

Clem Haskins, Greg Smith and the late Dwight Smith, all of whom were honored at halftime, wore the “Western Kentucky” jersey with pride.

So did Jim McDaniels, Kannard Johnson, Brett McNeal and plenty of others.

Thursday Western Kentucky (that’s what I’m calling the team for the rest of this column, because that was the name on its jerseys) did those threads proud by playing with pride, energy and some focus.

Saturday Florida Atlantic whipped the Toppers 44-28 on the boards in a 65-62 Owls win.

As a team, ULL shot 28.8 percent against the Toppers’ zone defense.

Western Kentucky also stuck with its offensive gameplan despite not being able to convert several early chances.

After starting the game 5-of-23 from the field, the Toppers finished at 42.1 percent.

Those points included some nice work in the paint by Akol and Fant (13 and 10 points, respectively) and some sharp cuts to the basket by Harris (16 points) and Price (13).

While none of the 4,914 folks in Diddle Arena will label ULL as a quality opponent, a win is a win. It’s also an especially important win since Western Kentucky hadn’t recorded one since beating North Texas Dec. 29.

The Toppers are still a few weeks away from senior point guard Jamal Crook being back from a broken foot. Until then, the group of guys currently out there has to contribute, from top to bottom, like it did tonight.

Thursday Western Kentucky played in uniforms that symbolized the program’s greatest accomplishment, a trip to its lone Final Four, and turned in a solid performance.

Saturday against Arkansas-Little Rock (5 p.m., Diddle Arena), the Toppers be back in the “WKU” threads and facing a team that beat them 75-67 on Jan. 3.

If they carry over the pride they played with Thursday into Saturday, they’ll have a good shot at another Sun Belt win.