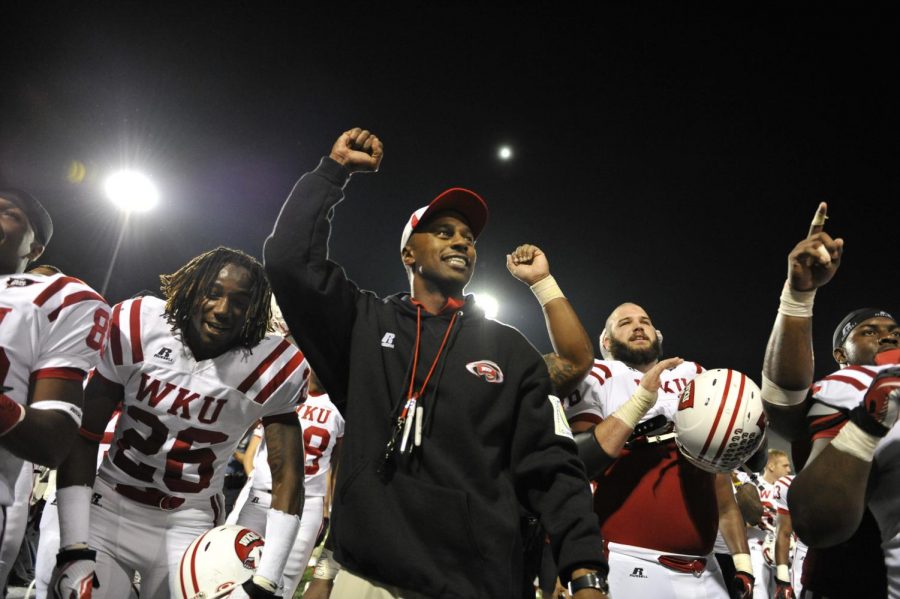 Willie Taggart is still the head coach at WKU — at least for now.

Taggart, who has been the subject of reports linking him to the opening at South Florida, said Wednesday he won’t “talk about any other job but the one I have, and the one I have is WKU.”

When asked if he’d been in contact with other schools or if he felt confident he’d be coaching the Toppers in 2013, Taggart changed the subject to WKU’s preparations for the Little Caesars Pizza Bowl.

Taggart said he addressed the reports with his team Wednesday afternoon, but didn’t go into detail on what he told the players.

A WKU source said no one has contacted the school for permission to talk with Taggart.

Players who were interviewed Wednesday also declined to go into detail about what was said.

“Right now that’s just all rumor and speculation,” tight end Jack Doyle said. “It’s nothing we can pay attention to. Right now we’re just so excited… about going to this program’s first bowl.”

Peterson said Wednesday that he was trying to keep fans’ focus on the upcoming bowl game, not his coach’s job status.

“Stuff like that that we can’t control, we need to avoid,” Peterson said. “We need to focus on what we’ve got Dec. 26 in Detroit.”

Taggart played high school football in the Tampa area and recruits the state of Florida heavily.