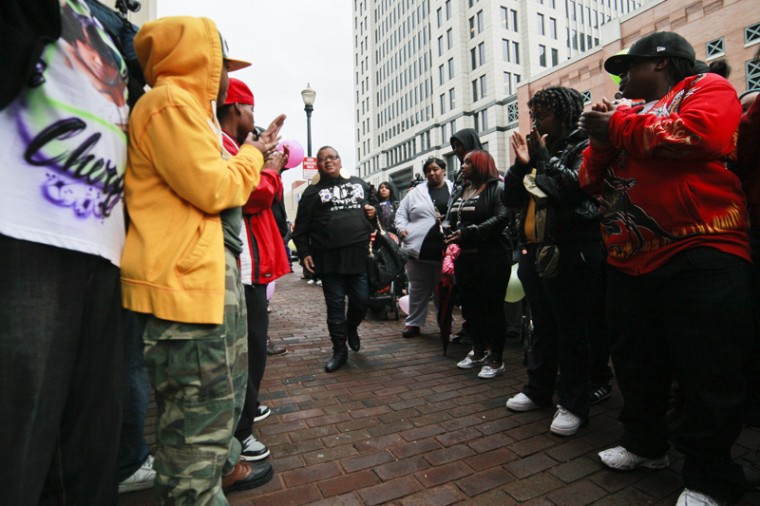 The crowd at the march in memory of Cheryl Williamson parts to let Donetta Williamson, Cheryl's mother, through to speak outside of the Gillespie building.

A crowd of people marched down Market Street in Louisville toward The Gillespie, the club where WKU senior Cheryl Williamson was shot and killed on Nov. 25.

The night before the march, a group gathered in front of the building, many wearing “have hope” hoodies — a slogan referencing Williamson’s Twitter name — while lighting candles in remembrance of her life.

By Sunday’s march, it had been seven days since she was killed. Among the supporters was Williamson’s aunt, Juanita Adams, who said Williamson’s death was taking a toll on her.

“It’s hard,” Adams said. “It gets rougher every day. Today, we had to go view the body, and it was hard on her mother, but I’m trying to be strong for her.”

The person responsible for their loss still hasn’t come forward. Christina Moore, who became close to Williamson while at WKU in 2008, believes more people saw the incident that night after the party.

“They’re just scared to come forward,” she said. “But I have hope that justice will be served soon. As you can see, more people are hurt — more than just her immediate family and friends.”

Moore said Williamson was a positive person in her life and someone to look up to.

“She touched everybody,” Moore said. “She never had a negative vibe. I know she’d like the fact that we are doing this.”

Williamson’s cousin Kenyatta Drake thought of the idea to organize the campaign two days after she was murdered. Drake hopes that clubs will take more responsibility about what happens outside of their venues.

She began the “Have Hope” anti-violence campaign to advocate an end to club/venue related violence. Drake, who’s been in the entertainment business for 11 years, said she likes to go to clubs, but she doesn’t feel safe anymore.

“It really hit home when it happened to my cousin,” Drake said. “If we can’t get additional security, additional police on the outside … This is going to continue to keep going on.”

Her eventual goal is to get a law passed requiring party promoters to have security and police patrol outside the club ensuring that no altercations take place. Drake said metal detectors and wands would help limit gun violence.

“If there was enough security and police out on the outside, this would’ve never happened,” she said.

Melissa Lott, associate minister at Bates Memorial Baptist Church, where Williamson’s funeral will be held this Tuesday, led an emotional prayer in front of the Gillespie.

“We don’t know when you will call our names, God,” she said through tears. “We want to be ready like Cheryl was ready.”

“She stood for opportunity and the chance to change the direction of your life,” she said.

During another portion of the march, people in the crowd released balloons to represent love being sent to Williamson.

Her parents held a large bunch of the balloons, which dipped down before they sailed away toward the neighborhood where Cheryl grew up, an onlooker said.

Her mother, Donetta, remembered how much Cheryl loved going to school at WKU.

“One time, I came down there and spent the weekend with her, and it was nice,” she said. “They showed us a good time. She loved it.”

Donetta hopes that Cheryl’s killer or killers will come forward.

“I hope that he will turn his self in,” she said. “If it was one, if it was two — they need to pay for this before he kills somebody else.” she said.