Pin Up Girls: How to: the no-plan pin 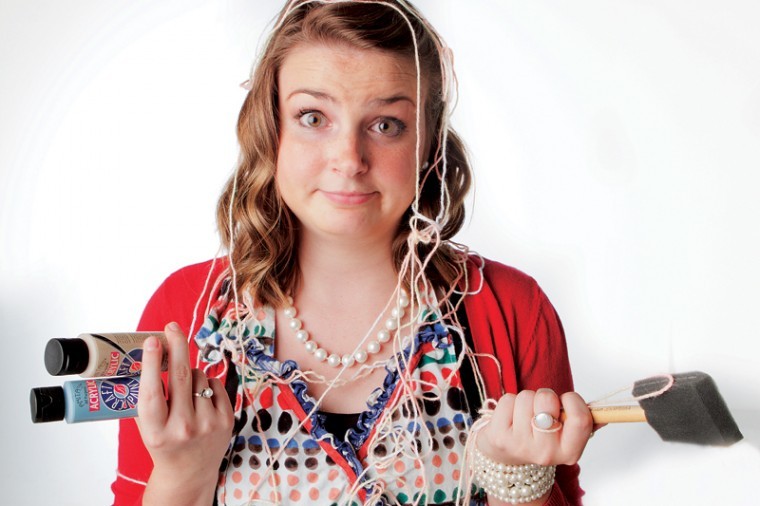 No matter how easy the pin looks, it always needs to come with directions.

I didn’t realize I felt this way until I sat down to make a picture frame wreath on Wednesday.

It seemed simple enough: take the back and glass out of a picture frame, paint it and throw some ribbon on it and hang ornaments or bells in the middle. Bam. That’s it.

The first pin I found linked to a blog entry with photos of lots of Christmas crafts. When I clicked on the image of the wreath, instead of a how-to, I was sent back to Pinterest on the exact pin I had literally just clicked on. That was useless.

The next pin I found had lots of pictures of the finished product taken at caddy-corner angles and talked about what materials were used, but it was nothing that I couldn’t tell by looking at the photos. So that was also useless.

Caitlin promised I would spread holiday cheer in this week’s Pin Up, and dang it, I will give you holiday cheer.

I bought a tacky gold picture frame with some obnoxious pink and green flower print for $2.75 at Goodwill. A small can of spray paint from Michaels was less than two bucks after a 40 percent off coupon, and red-and-gold ribbon was 99 cents. I also got a four-pack of large, gold jingle bells for $2. The whole project cost under $8, which is good, because I’m broke.

I decided to keep the frame gold but just paint over the scratched-up surface. However, I realized after a couple of quick sprays, my paint wasn’t an opaque metallic. Instead, it was very fine gold flecks. Not glitter, but not a solid coating of paint.

It was just enough to cover the dinged-up surface and add a nice shimmer to the frame. I did about five coats to really cover it. (But obviously you won’t have this problem if you buy opaque paint, unlike me.)

While the frame was drying, I put the bells on strands of green ribbon I had left over from a previous project. I cut the ribbon at different lengths so they would be staggered when hanging up.

In hindsight, I wish I had cut those ribbons longer and just tied them to the frame, but instead I glued them with Tacky Glue — a lot of Tacky Glue.

After that dried, which took hours, I put the final big red bow on it, and I was done.

Luckily, this pin is simple and fast. I can guarantee you will spend more time waiting on things to dry than actually working on the craft.

I’m still kind of annoyed there wasn’t a better tutorial, because you can always learn from someone else’s trials and errors,. Usually mine.