Stephens: For better or worse, 2012 Tops go out their way 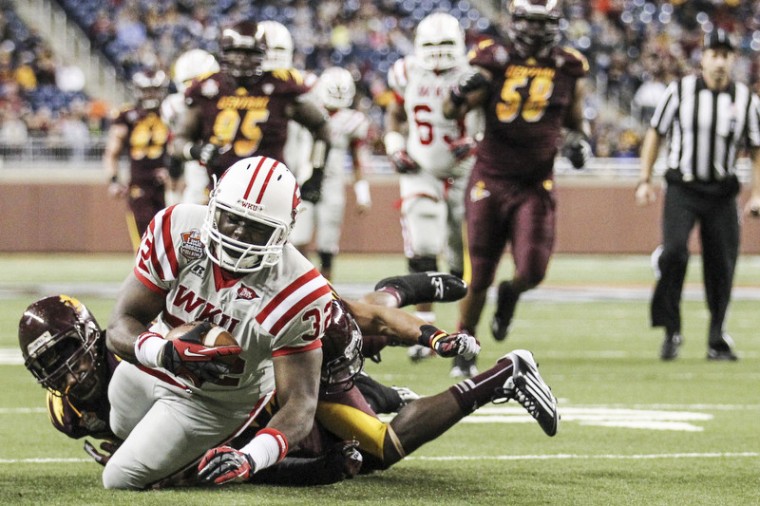 Junior fullback Kadeem Jones dives for the end zone during the fourth quarter of the Little Caesars Pizza Bowl. Jones was arrested July 13 on a drug charge.

DETROIT — When Lance Guidry and three WKU players walked into the Ford Field interview room Wednesday, they didn’t wear the long faces they’d worn in the past after such losses.

Guidry and senior quarterback Kawaun Jakes seemed relaxed after the 24-21 loss to Central Michigan — their last game as a Topper coach and player, respectively.

Running back Antonio Andrews and linebacker Xavius Boyd, both juniors, looked tired but ready to come back next season and make another bowl run.

All four seemed unsatisfied, but at peace with the game’s outcome.

“We left some big plays out on the field — a couple of interceptions, a couple of big plays in the passing game,” Guidry said. “It’s just sometimes the way the cookie crumbles.”

Safety Jonathan Dowling dropped a third quarter interception that he would’ve taken for an easy touchdown. The Toppers couldn’t recover a live ball off a fourth quarter Hendrix Brakefield punt that had been blocked but touched past the line of scrimmage by a CMU defender. Tight end Jack Doyle couldn’t haul in a pass from Jakes on WKU’s last drive that would’ve given the Toppers a late lead.

Along the way there were missed tackles, some blown coverages and a few unnecessary pre-snap penalties.

But the one sequence everyone was talking about after the game was how WKU’s final drive ended.

The Toppers treated the drive like it would be their last, methodically marching up the field and keeping the clock moving so CMU wouldn’t have much time to respond to a potential WKU score.

Finally the drive came down to a decision.

Willie McNeal was pulled down at the Chippewas 19 on a 3rd and 10 pass, leaving the Toppers two yards short of the first down marker.

With about a minute-and-a-half left, and holding all three timeouts, Guidry elected to bleed the play clock all the way to zero before calling a timeout. His plan was to then send kicker Garrett Schwettman out for a 36-yard field goal that would tie the game at 24. CMU would get the ball back with about 40 seconds left, likely leading to overtime.

But WKU’s seniors had other ideas.

Guys like lineman Adam Smith, Jakes and Doyle wanted Guidry to let them go for the first down and keep marching toward the winning touchdown.

They were the same bunch that wanted Willie Taggart to go for the overtime two-point conversion when trailing Kentucky 31-30 this September in Lexington.

All that call did was send WKU to its first win over an SEC team. Who can blame the seniors for going for it all again?

This time it didn’t turn out the way WKU wanted. The Chippewa defense jumped Jakes’ first passing read, forcing him to thread the needle on a sideline throw to Doyle.

The pass, a tough one, missed and the Toppers turned the ball over on downs.

Because of the time remaining on the clock and the fact WKU had just two timeouts, CMU was able to bleed the clock and claim a dramatic win.

Had Jakes found Doyle on the pass to convert the first down and WKU finished off the drive with a touchdown, Guidry would’ve been hailed as a gun-slinging genius, much like Taggart was after beating UK.

Instead, Guidry was criticized for not kicking the field goal and playing for overtime.

WKU’s coach, now 1-1 in bowl games as an interim coach, stuck by his decision after the game.

“(The team) kind of made the decision for me,” Guidry said. “I would do it every time and twice on Sunday. I put it in their hands and that’s the way it is.”

Whether he and the Toppers handled the late game situation the right way is up for debate.

“I can never really second-guess anyone that’s trying to win,” Enos said. “Sometimes you’ve got to make decisions like that. If it works, it’s a great call. If it doesn’t it’s not.

“But I never would ever criticize a football team when a team makes a decision and they’re just trying to win the game. I think it’s a good call.”

In my opinion, Guidry should’ve either called a timeout right after McNeal’s catch and then gone for the first down, or gone against his players’ wishes and stuck with his plan to kick the field goal.

In the first case, even if the Toppers had come up short on the fourth-down conversion attempt, they would’ve had another shot at the ball had they forced CMU into a three-and-out.

In the second case, WKU would’ve had a make-able field goal attempt and CMU wouldn’t have had much time to score before the end of regulation.

But there’s something to be said for Guidry listening to his players before going for the first down.

He put his trust and confidence in a group of Toppers, most notably the seniors, that had their fingerprints all over the program’s recent rise.

Before he joined the staff before the 2011 season, or even before Taggart took over following the 2009 season, Jakes, Doyle, Jamarcus Allen, Marcus Vasquez and others were already there. They’d put four, or in some cases five years of their lives into helping WKU through the difficult transition to the Football Bowl Subdivision.

Taggart had taught them to believe in themselves, attack each game with an enthusiasm unknown to mankind and chase greatness. Guidry wanted a continuation of that mindset.

So when it came time to kick the field goal or go for it, the seniors told the team to lay it all on the field and go for the win.

It was their team, their program and their decision.

Unfortunately for WKU, this time it just didn’t work.