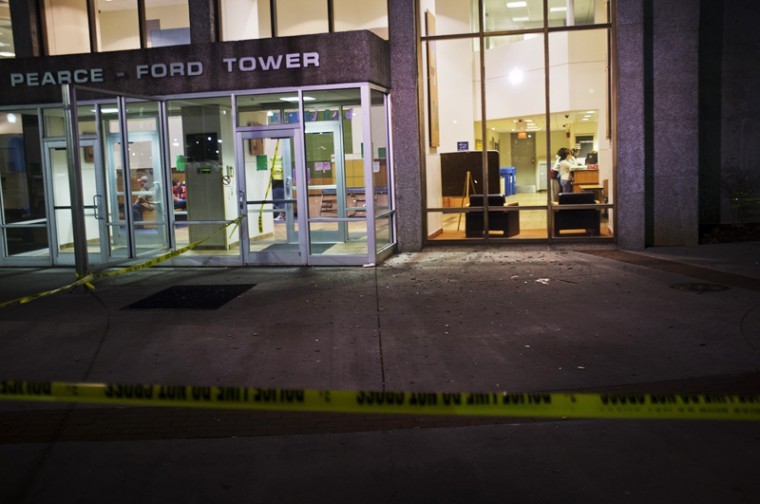 The scene of an accident outside of Pearce Ford Tower early morning on Dec. 15. The police have not yet released a statement about the incident.

An unidentified male student jumped from the sixth floor of Pearce Ford Tower at approximately 1 a.m. Saturday. He is now in critical condition, according to Saturday’s university press release.

He is at Vanderbilt University Medical Center, and his family has been notified.

Mandi Johnson, public information officer for WKUPD, said at this time the university doesn’t plan to release the student’s name. Johnson got this update from the media relations office.

“They said that the university decided not to release his name,” Johnson said.

Johnson said the decision comes from administrators, she is just the person who communicates that to the media, and Bob Skipper, director of media relations, and his office handle the press releases.

“I had a lot of people calling me yesterday and there’s just, there’s no new information to give at this time,” Johnson said.

The WKUPD are still investigating, and they did not find any evidence of alcohol or drugs in the initial police search of the room.

PFT has quarter-inch thick-tempered glass windows and a window stop that only allows the window to open 3 inches, according to the press release. A police search of the room found the window stop to be in place and the window properly closed, but the glass of the window was broken.

At the scene, glass appeared to be missing from the window, and broken mini-blinds hung out of the window. Pieces of broken glass were also visible on the ground. The room’s lights appeared to be turned off at last check.

Witnesses said the man still appeared to be moving as paramedics removed him from the scene by ambulance.

This is not the first time a situation like this has happened at PFT.

On Nov. 9, 2006, Louisville freshman Dylan Prott was found dead after he reportedly jumped from his window on the 20th floor of PFT, according to wave3.com.

The Herald will have more as the story progresses.