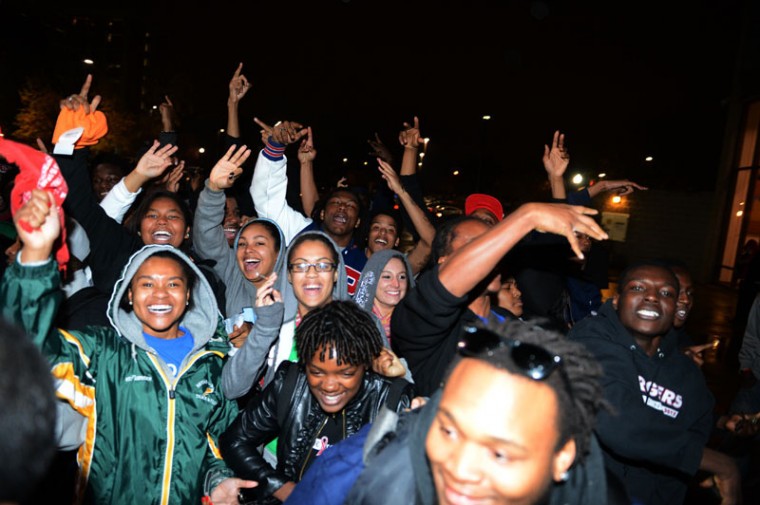 Students celebrate outside of Pearce Ford Tower after President Barack Obama was predicted to be re-elected on Tuesday.

Cheering, chanting Obama’s name and singing broke out around PFT. One group of students even began singing the national anthem.

Louisville junior LaQuanda Logan said she was happy that her voice was heard in this election.

“I felt like my first time voting, it actually made a difference,” Logan said. “I don’t have to go home and pack because financial aid is not getting cut, so that’s a good thing.”

Central City senior Morgan Oraike was also excited about Obama’s victory, but while watching the election results, she worried about the outcome.

Oraike said there were times she thought Romney might win the election.

“But in the end, the real winner prevailed,” Oraike said.

Tallahassee, Fla. freshman Ervin Montgomery said he heard the cheering around PFT from where he was watching the election results in Downing University Center. He decided to go down to the courtyard to join the celebration.

Montgomery said he chose to vote for Obama mainly for Medicare purposes and because Romney opposes abortion.

“That didn’t really stand good with me, so I felt Obama was the better choice and he wanted to make a better change than Romney did,” Montgomery said.

Montgomery said he was happy when Obama was projected to win.

“I was excited,” he said. “I actually started crying.”