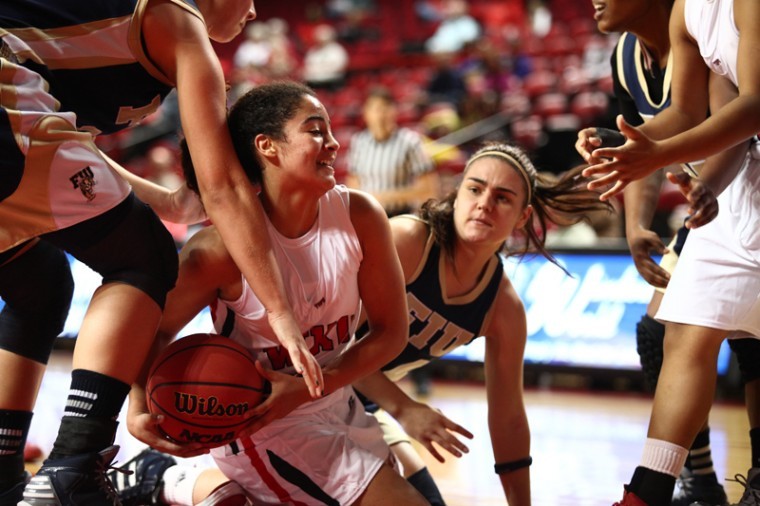 WKU used a strong defense to shut down the Sun Belt Conference Preseason Player of the Year Jerica Coley, holding her to just 12 points on the night. Last year, Coley totaled 68 points combined in both meetings with the Lady Toppers.

“Our goal was to be able to limit her touches and also not let her go on a spree,” coach Michelle Clark-Heard said. “Our kids bought into it. Our biggest thing was that we were trying to keep fresh legs on her so we could stay up on her defensively and just give her one shot.”

Alexis Govan said the early conference win was a statement game for the Lady Toppers.

“We talked about having to make a statement tonight and people still may doubt it,” Govan said. “The underdogs are going to come for you.”

Heard said the team is already ahead of their expectations for the year.

“If you had told me we would be 1-0 in the Sun Belt and 3-0 on the season I don’t know what I would have said to that,” Heard said. “I got an unbelievable group that is resilient and plays hard all the time. It’s a fun group to coach right now.

“For an FIU team to have four starters back and the preseason player of the year, it just says wonders for our team and how hard they play.”

WKU only gave up 11 turnovers, its lowest amount in two years. The Lady Toppers stole the ball 15 times from the Panthers, while FIU came up empty handed defensively for steals on the night.

The Lady Toppers also shot 78 percent on free throws, visiting the line 23 times versus the Panthers, who took just seven trips to the foul line.

The Lady Toppers established an early defensive presence forcing five turnovers in the first five minutes of the game.

FIU spent the next several minutes struggling to find the basket, shooting 3-of-14 while WKU advanced to a 24-15 lead with 7:53 to play in the half.

FIU’s Arielle Durant sparked some life into the Panther offense by dropping four straight buckets to pull FIU within two with less than four minutes to play. But WKU responded, closing the half with an 8-0 run to lead 35-23 at halftime.

The Panthers utilized their size advantage over the Lady Toppers in the second half to pull within four with the help of an earlier 8-0 scoring run from FIU and a pair of buckets from Coley.

With less than a minute to play, FIU was knocking on the door of the Lady Topper lead, trailing 58-53. Freshman point guard Micah Jones stepped up big in the final ticks of the game, shooting 4-of-4 from the in the final minute to help the Lady Toppers reach 3-0 on the season for the first time since 2009-10.

Following Chastity Gooch’s team-high 16 points were Jones and Govan, who each finished with 12 points.

Govan said that Heard challenged the team at halftime to pick up the defensive game.

“We were pressuring them and our offense just kind of came along,” Govan said. “Coach just challenged us to pick up our intensity and we did just that.”

Heard said the 3-0 start gives her Lady Toppers all the confidence they need heading into Saturday’s contest with Illinois State.

“As hard as this group has tried to buy into this system, myself and my staff, I’m not surprised,” Heard said. “I’m not surprised with how hard they play. I think a lot of the stuff is going to take care of itself.”

WKU gave up a 71-45 decision to Illinois State last year in which the Lady Toppers shot just 26 percent from the floor. Tip-off is scheduled for 5:30 p.m. Saturday in Diddle.