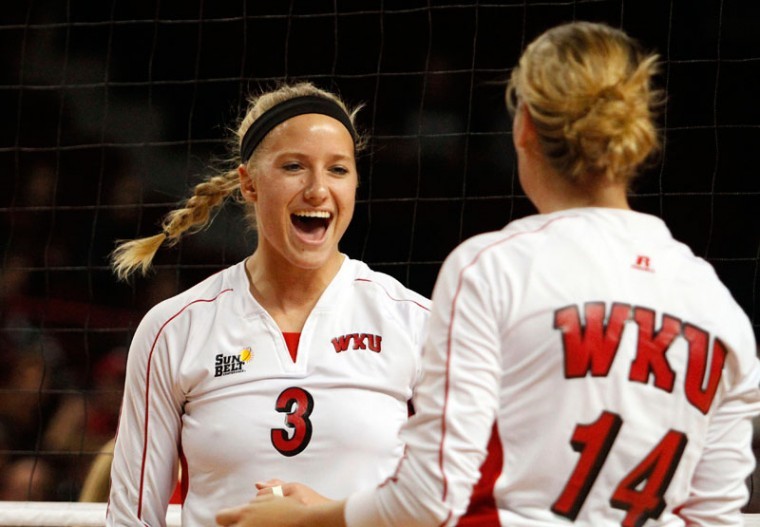 Sophomore, middle hitter, Heather Boyan, celebrates a point in the Sun Belt tournament with Junior, setter, Melanie Stutsman. The tops won in three straight sets to advance to the finals.

The Lady Toppers and Red Wolves exchanged leads one at a time through much of the first set until a service ace from Jordyn Skinner forced an ASU timeout with WKU ahead 14-11.

“It started out nuts – It was kind of helter-skelter there for a while,” Hudson said. “We spent those two timeouts in game one to literally sit back – not talking – to catch our breath to get locked in and when we did that we were pretty good.”

Back-to-back service aces from senior defensive specialist Sarah Rogers later on helped the Lady Toppers prevail in the first set with a 25-19 win.

Set two began with much of the same tone as the first frame. An 8-1 run capped off by a kill and block by Heather Boyan put the Lady Toppers ahead 11-4. WKU scored seven of the set’s final eight points to take the frame 25-11 and a 2-0 lead at intermission.

Arkansas State scored the first point in every set of the match, and nothing changed that routine in the third set. The Red Wolves largest lead of the entire game came early in the set leading 4-2. WKU put out the fire in ASU with a Melanie Stutsman service ace to put the Lady Toppers up 12-8.

The Red Wolves tried to catch up, but WKU proved to be too much once again as they once again swept ASU to advance to the Sun Belt Championship game.

The Lady Toppers will take on North Texas, a team that fought back to defeat Troy 3-1 Friday afternoon.

Hudson said one of biggest concerns in the regular season for the team was their road trip to North Texas.

“I have a lot of respect for what Ken (Murczek, UNT coach) does and his kids play with so much emotion,” Hudson said. “They play so hard and you know you’re going to get that again tomorrow.

“They never quit on a play. Obviously Carnae Dillard is a kid they lean on pretty heavily and she’s been more than up to the challenge at this point.”

Dillard may be the most explosive player the Lady Toppers have faced this year. When WKU played the Mean Green in October, Dillard posted 11 kills on the Lady Topper defense.

But in the semi-final match-up with Troy, she posted a current tournament-high 31 kills on 74 attempts.

WKU has a chance to win back-to-back Sun Belt titles on Saturday, something senior Jordyn Skinner says the team is embracing.

“It’s exciting because I’m a senior and we’ve never done it before in Diddle,” Skinner said. “That’s something for us to look forward to. We’re pumped and ready for it.”

Heather Boyan and Haley Bodway paved the way for WKU on the night with 10 kills each. Melanie Stutsman tossed up 36 assists and recorded 7 digs while Sun Belt Defensive Player of the Year, Ashley Potts, went for 20 digs and three assists.