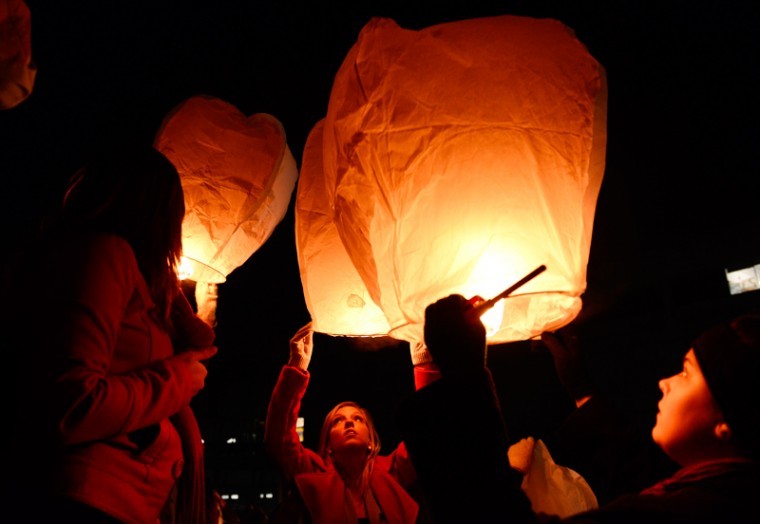 Marion sophomore Zoie Black releases lanterns with her sisters during Landon Lovett's memorial ceremony on Nov. 28, 2012. "Even though I didn't know Landon, all of my sisters did, and everyone's emotions left such an impact on me," Black said.

Hundreds of lanterns lit up the clear night sky over the Colonnade Wednesday, each one a prayer for Landon Lovett.

Lovett, a member of Alpha Omicron Pi sorority, died Nov. 20 as a result of a head-on vehicle collision Memorial Day weekend that left her in a medically induced coma.

It was a special night of prayer and remembrance for AOPi, who put on the lantern-lighting ceremony.

Alex LeForge, president of AOPi, began the ceremony as hundreds of students, many of them Greeks, sat huddled together in the cold.

“She of whom we are remembering here today has treasured us with an inspiring memory,” LeForge said. “No eulogy can praise her beyond the knowledge of her character and usefulness that fills the hearts of her sisters.”

Corbin junior Jenna Partin, a member of AOPi, continued the service. She remarked on how even though Lovett was only a member of the sorority and a student at WKU for one year, she left a lasting impression.

“She was as beautiful on the inside as she was on the out,” Partin said. “Her smile was contagious, and she brightened everyone’s day … She was loving, gracious and continually displayed AOPi’s rituals and values. Landon was our faith in times of struggle. We could always find hope in her ability to make people laugh.”

After a silent prayer, the lighting of the lanterns began. One by one, the paper lanterns were lit and slowly began to rise through the night sky.

Several lanterns were swept away by the wind into nearby trees, but the vast majority continued to rise through the air, eventually becoming indistinguishable from the stars speckled throughout the sky.

Each lantern was purchased individually for $5 or bought in a pack of five at $3 per lantern by Greek organizations or friends of Lovett. The money raised will go to the Lovett family to help them pay medical bills.

Louisville junior Melanie Anderson, a member of AOPi, said that the organization has done numerous fundraisers for the Lovett family, but that this one was especially significant.

“It’s our way to bring closure to Landon,” she said.

Upton junior Micah Farmer, a member of Alpha Tau Omega fraternity, said it was important for the Greek community to come together in support of one another.

“You give a donation, and you come together to remember someone special,” Farmer said. “I felt like it was the right thing to do. We are all part of the Greek community.”

LeForge, a Richmond senior, said the lanterns were a great way to symbolize Lovett’s life and a way to bring together the entire WKU and Greek community.

“We didn’t want it to be all sad and serious … That’s not how Landon was,” LeForge said. “Landon was fun; she was energetic. She was always making people laugh.”