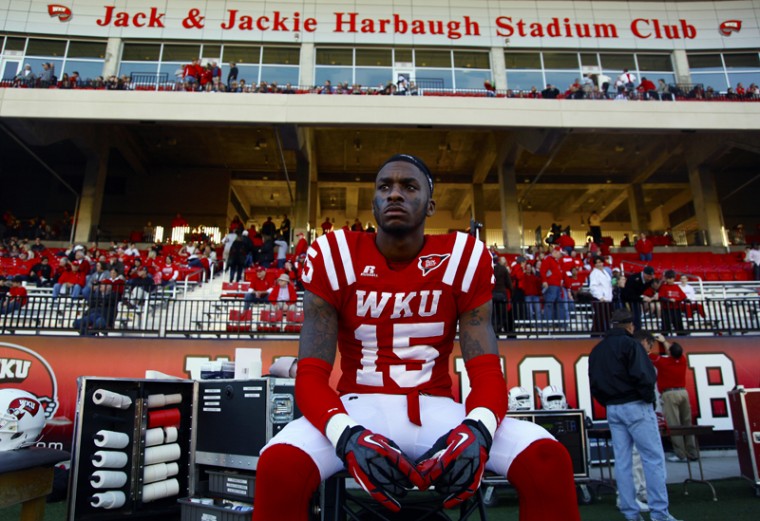 It’s time for a conversation change around campus.

Just 10 days ago, when WKU was 6-2 overall and 3-1 in the Sun Belt Conference, a bowl berth was almost a guarantee.

People weren’t asking if the Toppers were going to their first bowl as an FBS member. Rather, they were asking to which bowl destination they were headed.

Confidence had gotten so high a lot of WKU fans were getting picky about which bowl game they’d want to attend.

Fans were excited about the possibility of the Liberty Bowl (New Year’s Eve in Memphis on ABC!) and were dreading potential of selection to the Little Caesar’s Bowl (the day after Christmas in Detroit).

The final four games were nothing more than a nuisance for fans, a month-long wait until they found out what plane tickets to buy and what hotel rooms they needed to book.

But, two games into that four-game stretch, you can put those plans on hold because this team isn’t playing like it’s going anywhere.

Nine days after a five point loss to Middle Tennessee State, WKU’s season hit its low point on Saturday, as the Toppers fell 37-28 to a pedestrian Florida Atlantic squad.

A 10-play, game-opening touchdown drive aside, WKU was remarkably flat in the loss.

There wasn’t even one area of blame you could identify as the reason for the loss. Really it was a team effort — or lack thereof.

With all that blame to go around, coach Willie Taggart shouldered it after the game.

He didn’t let his players talk to the media, instead saying everything was his fault.

It very well could be, but right now it doesn’t much matter who carries the blame.

What matters is that the Toppers get their problems fixed before a once-promising season goes down the tubes.

There are a finite number of bowl openings. No team should understand that better than WKU, which was shut out of a bowl last season despite going 7-5.

Bowl committees selecting participants look for certain things from a prospective team — what kind of quality wins it had, what kind of fan support it had, how it finished the season.

Do the Toppers fare well in any of those categories?

Their six wins are against opponents that have won a combined 16 games, with the most notable non-conference win coming by one point against a historically bad Kentucky team.

As for the fans, they had an even more pathetic showing than the team Saturday, using an early noon kickoff as an excuse not to come to the stadium.

Just think about the fact that WKU was fighting for its bowl lives at home on a sunny, 70-degree day, and there was an announced crowd of about 14,000.

And as far as finishing the season with some momentum, the Toppers are doing the opposite.

Three losses in four games has this team looking mighty average rather than mighty.

Bowls want a team that’s playing hot and can ensure a good performance. That definitely isn’t WKU at this point.

Taking those factors into consideration, it’s starting to look like the Toppers aren’t the bowl team we thought they were a month ago.

After the game, Taggart agreed. When asked if his team was playing like it was deserving a of a bowl bid, he didn’t pull any punches.

“No, not right now,” Taggart said. “You lose two in a row, especially at home… It’s unacceptable.”

WKU has two games left to prove it belongs in the postseason.

First will be a trip to Lafayette, La., for a tough game against Louisiana-Lafayette — a team that almost upset Florida Saturday.

Then will come a Nov. 24 regular season finale against North Texas.

Both games are pretty much must-wins if the Toppers’ bowl hopes are to become a reality.

Should WKU drop those games and not end up not in a bowl, it’ll be an awkward realization for a lot of people who thought a bowl bid was set in stone.

At this point, fans might not have to worry about spending Christmas in Detroit, after all.

Right now they may not be going anywhere.