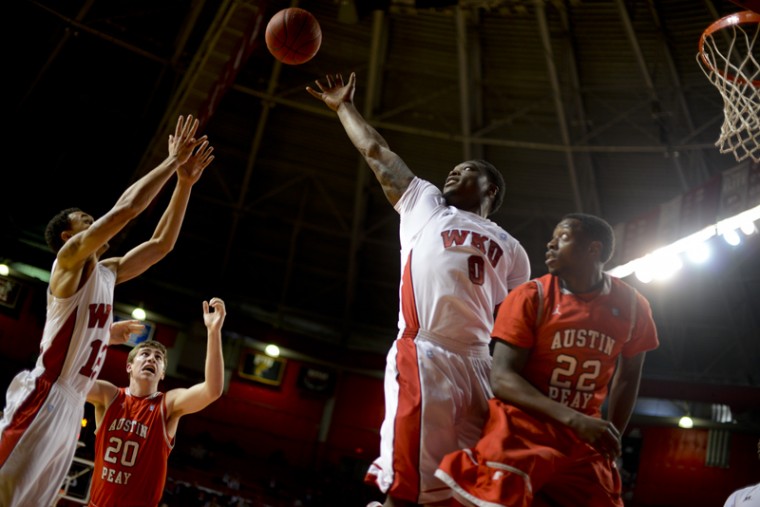 When the shots weren’t falling for the Toppers on Tuesday against Austin Peay, their nose for the basketball is what kept them in the game.

After a 13-point first half lead turned into a 33-33 tie at halftime, WKU (1-1) stormed out and controlled the basketball in the second half.

The Toppers scored the first six points of the half and ripped off an 18-1 run with 12 minutes to go as they rolled to a 74-54 win, their first of the year.

Those runs wouldn’t have been possible without a significant presence in the post, though — WKU won the rebounding battle 22-13 over the Governors in the second half and had a total of 45 rebounds for the game.

Sophomore forward George Fant was the biggest post presence. He recorded at team-high 14 rebounds to go with 15 points.

Fant said the Toppers go into every game with the intent to pull in more rebounds than their opponent.

“We challenge each other to beat the other team in rebounding, and that’s what we’ve been doing,” he said. “It’s working for us.”

Coach Ray Harper said Tuesday’s game should be a sign of things to come from Fant.

“You look at his stat sheet — 15 points, 14 rebounds, four blocks — maybe I expect too much, but I know he can do more,” Harper said. “I’m going to keep pushing him each night out.”

Fant benefitted from the play of senior center Teeng Akol. The nontraditional center plays around the perimeter at times, which gives Fant an opportunity to get the majority of the rebounds under the basket.

Fant said the way Akol works outside of where a traditional center usually plays makes his job a lot easier.

“He thinks he’s a guard,” Fant said of the center.

Akol, who pulled in six rebounds and scored 14 points on Tuesday, said he thinks rebounding can be one of WKU’s biggest strengths this season.

“We can be a great rebounding team,” he said. “We’ve got to commit to it, come to practice, and work on it every day.”

Many of Akol’s 14 points were midrange jumpers, some even coming from around the three-point line.

Harper said he wants to see the center asserting himself in the paint more.

“He’s extremely skilled down there,” Harper said. “As the season goes on, the more that we can get him in the post, the better basketball team we will be.”

WKU will face another smaller lineup in their next game when they take on Western Carolina at home on Saturday at 7:30 p.m.

WCU (1-1) doesn’t have a player over 6-foot-8, which bodes well for the Toppers’ post hopes. However, the school returns four starters from last year’s team, which went 17-18.

Harper said he expected the Catamounts to challenge his team if they don’t improve in practice this week.

“It will be another tough contest,” Harper said on Tuesday. “We’ve got to make some improvements. Hopefully we can do that over the course of the next three days.”