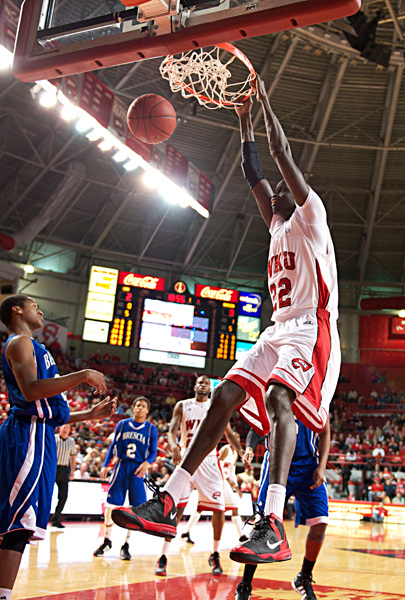 Senior center Teeng Akol dunks the ball against Brescia. Akol had 11 points in the game. WKU won 74-46 against Brescia on Saturday Nov. 24, 2012 at Diddle Arena.

WKU made mincemeat out of an overmatched Brescia team on Saturday, picking up a 74-46 win at home.

It was an easy homecoming for the Toppers, who played in a two-game tournament in Cancun earlier this week.

Defense was the key for WKU (4-2) on Saturday. Brescia, an NAIA Division II school from Owensboro, was held scoreless from inside the three-point line for the first 30 minutes of the game and finished with just four field goals that were not three-pointers.

With sophomore forward George Fant out with a knee bruise, the WKU offense ran through its guards. Senior Jamal Crook had 17 points and six rebounds and sophomore T.J. Price added 14 points, though he turned the ball over six times.

Coach Ray Harper said he saw a lot of faults in WKU’s performance though. He said it was obvious the Toppers were a different team without Fant.

“We missed George Fant,” he said after the game. “Let’s be honest, we need him to be ready to go by Thursday because it’s obvious we miss him a lot.”

The game gave WKU a chance to give its reserves some playing time. Freshman center Aleksejs Rostov made the most of his opportunity, scoring 16 points while pulling in eight rebounds.

He said Brescia’s focus on the outside allowed him to dominate the paint.

“They really didn’t put any pressure on the basket and they tried to shoot everything from the outside and three-point line,” he said. They didn’t really bother us down on the block.”

The Toppers next game won’t be such a cakewalk. WKU starts conference play on Thursday against Louisiana-Monroe.