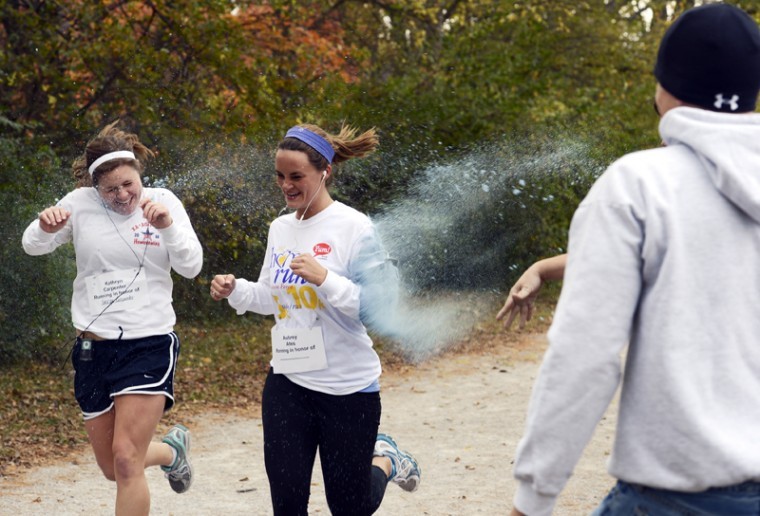 Kathryn Carpenter and Aubrey Ates run through one of the stations of color during Bowling Green's first "A Color Run to Remember," put on by the WKU fraternity Phi Gamma Delta to raise money for their philanthropy, the Alzheimer's Association, to assist in the fight against the prevalent disease.

Louisville sophomore Kyle Stewart, a Fiji member, played a large part in putting the event together.

“A lot of our brothers have been impacted by Alzheimer’s, so they’re really passionate about the cause,” Stewart said.

The fraternity has hosted many events in the past to benefit the Alzheimer’s Association, including last summer’s bike expedition, Bike4Alz.

Evansville senior Tyler Wittmer, a Fiji member who participated in the biking event, said the group was able to raise more than $70,000.

“This cause is really close to our hearts,” Wittmer said.

To get the word out, Fiji mainly used social media routes such as Facebook and Twitter and called local radio stations to make announcements.

Louisville senior Jordan Kassel, a Fiji member, said he was happy with the way the day went.

“I’m excited about the turn out,” Kassel said. “It’s been a great day for it.”

Early registers received a T-shirt, and all participants received water and bags of color powder at the end.

“I came out because I have a lot of friends that are Fijis, and my grandmother is currently battling Alzheimer’s,” Shepherd said. “I wanted to run for her.”