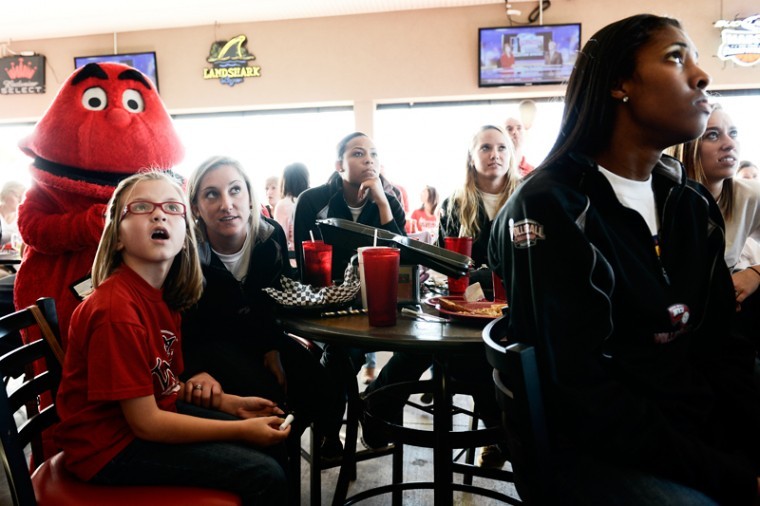 Harlie Bryant, left, and Junior defensive specialist Ashley Potts, right of Bryant, watch the selection show to see where they will be playing in the NCAA tournament. WKU volleyball team celebrates after finding out that they will be going to California to play against Loyola Marymount on Friday Nov. 30, 2012.

WKU will be playing the first round of the NCAA Tournament far away from Bowling Green.

The Lady Toppers (32-3) will go to California for the opening rounds of the NCAAs, taking on Loyola Marymount at 7:30 p.m. CT Friday at Stanford University.

WKU, Kentucky and Louisville each placed a bid to host the first two rounds of the tournament. WKU was the only one of the three denied a host position.

Instead, the west coast trip came as a surprise to coach Travis Hudson.

“For us to end up in Palo Alto, Calif., is a bit of a surprise — as is our first-round opponent,” Hudson said Sunday at an NCAA Selection Show watch party at Overtime Bar and Grill. “I’m far more familiar with teams in the Midwest than I am with Loyola Marymount.”

Hudson said after the Sun Belt Conference Tournament that WKU’s tough early schedule helped the team to its best record in school history.

That planning may help the Lady Toppers if they advance to the second round, where they could likely meet No. 2 Stanford. The Cardinal will meet Jackson State Friday in its first round matchup.

“I think it’ll be a really, really good first-round matchup, and, obviously, the winner of that most likely gets a Stanford team that has been No. 1 for a good portion of the year,” Hudson said. “(Stanford) coach John Dunning is one of the people I really respect in this business, and I look forward to making the trip.”

“I’m excited. I was looking forward to going somewhere different,” Rogers said. “I know we’ve been to Louisville, and that would’ve been cool to have all of our family and friends there — but how can you beat California?”

This is familiar territory for this group of Lady Toppers. Last year’s team exited the first round with a loss to Marquette in Champaign, Ill.

Senior outside hitter Jordyn Skinner said that this year, the team learned a lot from that loss and will be searching for that first Tournament win.

“A lot of us are returners, so we kind of know the feeling,” Skinner said. “It’ll just be another game for us. It won’t be as tense or as high-strung, and I think we’ll be able to relax and play.

Rogers said confidence and experience were the biggest things the team took from last year’s tournament.

“We’ve all been through it at least a couple times now,” Rogers said. “We’ve been preparing for it mentally as well this year, so I think that’s going to help a lot, too.”

While WKU will fly more than 2,000 miles to Palo Alto — Loyola Marymount will commute just 363 miles for the game.

Hudson said the assignment to the West leaves fans empty-handed but gives them a good shot to come back closer to home if they advance further in the tournament.

“It would’ve been great for our fans to be in Louisville, but we’re looking through this from a competitive standpoint,” Hudson said. “We feel like we have a matchup in the first round that we’ll have a competitive chance to play, and that’s all you can really ask.”

The LMU Lions will enter the matchup 18-12 and finished 8-8 in the West Coast Conference.

The Lions will make their first NCAA Tournament appearance since 2005. On the season, LMU defeated two ranked opponents in their conference, No. 16 Brigham Young University and No. 24 Pepperdine.

As Hudson said he didn’t know much about teams from the West Coast, the same stands true for Skinner, who said Sunday after the selection show that she knew “nothing” about LMU. “I didn’t know they existed,” Skinner said laughing.

“I know our coaches are going to get in tonight and try and find film and whatever they can, and they’re going to get us prepared as well as they can. I’m sure by (Monday) we’ll know a ton about them.”